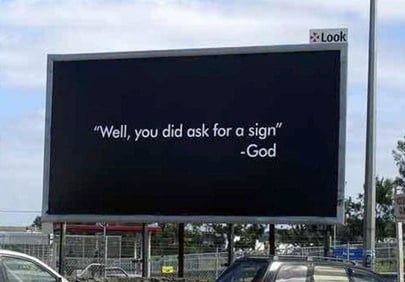 Signs are tricky. As a spiritual director and licensed clinical social worker of many years, I have journeyed with people who have followed signs from God, as sure and trustworthy as the Risen Jesus on the road to Emmaus, and I have tried to deter people, as they cling to signs of their own making, or worse, of the devil's design.

True signs from heaven come to warn, deter, console, enlighten, encourage, confirm, instruct, direct us, or to signify God's saving presence for the burgeoning of faith: "They went forth and preached everywhere, while the Lord worked with them and confirmed the word through accompanying signs."--Mark 16:20

In an divine effort to wake up the soul, genuine signs often appear exquisitely tailored to the attention of each unique human person. The North Star spoke to the wise men, but the angels spoke to the shepherds, and a dream spoke to St. Joseph. What catches your eye, or perks your ear, or floods your emotions, I may not even notice.

The most trustworthy signs come unexpectedly and without the asking, and they can strike a thousand different chords in our hearts: from delightful, sweet and serendipitous, to odd, disturbing, even horrifying. In the following excerpt from the book, Full of Grace: Miraculous Stories of Healing, a man named Jaime Jaramillo, who became a Nobel Peace Prize Nominee, received his life's calling through a tragic occurrence:

As I walked along, a Fisher Price toy box decorated with the picture of a doll suddenly fell onto the road from a passing car. A group of street children noticed it and immediately ran into the street. A little girl reached it first, and with a look of triumphant glee, she lifted up the box above her head. Her eyes met mine, and the expression on her face said clearly, “Look what I found!” Happy and radiant, she continued to stare directly at me, smiling broadly, and I smiled back—neither of us aware that a large truck was advancing toward her at an alarming speed. The truck driver slammed on the brakes, but it was already too late: the right side of his trailer crushed her against the pavement. Seized with sorrow, I stepped toward that heart-wrenching scene. Next to her dead body lay the toy box. It was empty.

That empty Fisher Price toy box was a divine sign for me. In that moment, I began to understand my mission in this world.

With all the grief, resentment, and anger that I felt, I went to a shopping center and purchased a Santa Claus costume. Then after lifting a sack of a hundred cheap presents onto my back, I walked out into the streets as Saint Nick to distribute the gifts to the children of the streets. . .

. . .Thus was born, on that Christmas in 1973, la Fundación Niños de los Andes (Foundation for the Children of the Andes), a foundation I still help run that rescues, raises, and rehabilitates street children.

It takes an open heart, a beautiful heart, a malleable and obedient heart to notice the signs God sends, and then to swell with courage or gratitude in response.

Even then, signs can be tricky. To know if God is the one reaching out to communicate requires keen spiritual discernment--for not every sign comes from God. The devil can give us counterfeit "signs," for instance, to encourage us to sin, or to divert our attention away from a greater good. One of my clients, when in her wayward twenties, decided to go out for a night on the town in Berkeley--something she almost never did. When she walked upstairs to the second floor of a restaurant bar, which squeezed about ten people between its walls, a young man from France was standing right in front of her. She'd had a fling with him for a few weeks in Paris, the summer before, and he didn't just travel across the world to Berkeley to see her, neither did he know where she lived. Of all the possible places around the globe, he ended up at that exact location, on that particular night, at that particular time. I don't know what the odds are of that happening, but I would guess it is around one in a trillion or more.

This young man, an atheist, and she, a New Ager, at that time, could not escape the statistical rarity of this near-impossible "sign"; and its unspoken "message" was too hard to ignore: they were supposed to hook up. So that night, under the guise of "it was meant to be," the devil enjoyed staining their souls with yet another serious sin.

But we're not always deceived by evil in the discernment of signs. Sometimes we're simply fooled by ourselves. I know an entirely sane man who  told me that during his hour of adoration of the Blessed Sacrament, he had seen a vision of a lady, outlined within the Host. To him, this meant that he was going to marry a woman he'd met recently at a temporary job. "Are you dating her?" I asked him.--"No." "Spent any time alone with her?"--"Hardly." "Has she shown any interested in you?" --"Not sure."

Every sign worthy of notice must coalesce with other important factors of discernment, such as Scripture and Church teachings, prayer and fasting, personal desires and charisms (gifts), wise counsel, God's providence in circumstances, and sound judgment and reason. A sign cannot be trusted if it rises above these other factors, conspiring with our strong feelings to ignore the obvious. The least trustworthy signs catch our interest when we are spiritually naive, unmoored from the commandments of God, or grasping to fulfill unmet desire. It is then that we can become our own false prophet.

We human beings, made in God's image, beloved and so precious, with divine wisdom imbued in the enlightened depths of our souls, possess an uncanny ability to cling to a false sign, while categorically disregarding what God is trying to make obvious. Sometimes we just don't want to see what stands right in front of us, or we simply want what we want, when we want it. Then if a sign coincides with our desire, we peg it as real. If it doesn't, we toss it hastily from our minds.

A woman once shared with me how she had asked God for a sign as to whether she should get an abortion or not, and the day that she had her appointment at Planned Parenthood, she hopped on a bus, which started taking off in the wrong direction. Then when she finally made it to the clinic, as the doctor was preparing himself to perform the procedure, his medical equipment suddenly malfunctioned. "This has never happened before," he said. Only in retrospect, could she see so clearly that God was giving her signs, but her fearful heart had doubted and dismissed them, as she went forward with the procedure.

I work with women and men who have had abortions, and I love them and help them truly heal, and so many of them have told me that when they were in a crisis pregnancy, they asked God for a sign as to whether or not they should abort their child, and then grew angry with God for not making the right choice obvious to them.

Please note this with all your mind and soul. If we are discerning God’s will and wondering whether or not to do something that goes against Scripture or Church teachings, we don’t have to look any further. We have already received our sign.

Let us not simply pray for a sign, if that's what we want from God, but pray for a discerning heart--a heart open to seeing what God wishes to show us, able to reject what He is not, and willing to follow in faith wherever He leads.

“There was a rich man who dressed in purple garments and fine linen and dined sumptuously each day. And lying at his door was a poor man named Lazarus, covered with sores, would gladly have eaten his fill of the scraps that fell from the rich man’s table. Dogs even used to come and lick his sores. When the poor man died, he was carried away by angels to the bosom of Abraham. The rich man also died and was buried, and from the netherworld, where he was in torment, he raised his eyes and saw Abraham far off and Lazarus at his side. And he cried out, ‘Father Abraham, have pity on me. Send Lazarus to dip the tip of his finger in water and cool my tongue, for I am suffering torment in these flames.’ Abraham replied, ‘My child, remember that you received what was good during your lifetime while Lazarus likewise received what was bad; but now he is comforted here, whereas you are tormented. Moreover, between us and you a great chasm is established to prevent anyone from crossing who might wish to go from our side to yours or from your side to ours.’ He said, ‘Then I beg you, father, send him to my father’s house, for I have five brothers, so that he may warn them, lest they too come to this place of torment.’ But Abraham replied, ‘They have Moses and the prophets. Let them listen to them.’ He said, ‘Oh no, father Abraham, but if someone from the dead goes to them, they will repent.’ Then Abraham said, ‘If they will not listen to Moses and the prophets, neither will they be persuaded if someone should rise from the dead.’”