Shopping for Appliances at Madame Tussauds 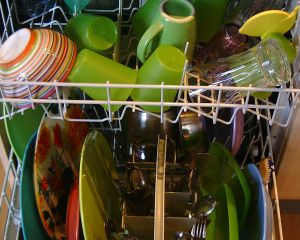 The other day my daughter and future son in law were nodding in mutual agreement about the moral corruption of salesmen. (By the way, do not take this to mean they will have a happy marriage. This daughter is his future sister in law.)

They were saying they have this friend who quit his job as a salesman because he was too good at it.

He felt bad getting people to buy things. Things that they might not need or really even want.

I've met this friend and I believe it. Even though I'm tighter than spandex on a Walmart shopper, he can sell me something I don't need or want anytime.

So just as my noble minded daughter and future son in law were wrapping up the conversation on mutually agreeable terms, I jumped in.

"You guys are crazy," I said nobly and agreeably. "Getting people to buy things is the name of the game! It's not immoral. They have free will. He's not hypnotizing people!"

My daughter (another one, I have a lot) works at Swankee Candle. (Motto: Collect them all! What else are they good for?) She is great at getting people to buy more than they come in for. Though I have no clue how.

People like me do not shop there. We do not even shop in malls that carry that store.

Now, what if someone does go in there and gets drunk on the candle fumes, and goes into a buying frenzy? They do not need to sell their home. After they sober up, they can always bring the stuff back.

But who knows? Maybe they will keep it. Maybe they DO need or want this stuff after all.

Suppose my daughter convinces them to buy a candle that they don't personally intend to use but would make a great gift for their mother in law's birthday? They can now cross mother in law OFF the list just like this:

They feel great. Not only did they enjoy crossing off mother in law, they do not have to spend excessive amounts of time worrying about what to buy, shopping around, getting home late to let out the dog, finding the couch half-eaten, and the rug a swamp. She has done them a favor.

That was my theory anyway.

The funny thing is that the very next day I had a chance to test it.

I went to my favorite local appliance store to look for a dishwasher. This is the place that sold me my beautiful GE stove. What's so beautiful about it, you want to know? It doesn't look anything like the one I threw away.

Anyway, I had such a good experience there with two different salesmen and have had nothing but joy pushing buttons on this stove and getting it to actually heat things that I've been telling all my friends about this store ever since. My friend Steph even went in and bought the same model.

So I go in there and what happens?

Would you believe nothing?

I walk in, say hello and no one comes up to me. They say hello back but stay comfortably seated. Apparently they are posing as salesmen for an appliance store scene at Madame Tussauds.

So okay, I throw them a hint: "I would like to buy a dishwasher."

Salesman One points: "They're over there."

Okay... Perhaps he will follow me. I walk over and read price tags. This is not a fun place to start.

So I walk back over and drop another hint: "Could somebody come over here and show me these dishwashers?"

To his credit, Salesman One gets up.

He follows me over and stands there silently, politely waiting for me to pick a topic.

I decide not to mention how rampant anti-Catholic bigotry has really got me down lately and say instead, "Tell me about these dishwashers."

"What do you want to know?"

I shrug. "Everything? I've never bought a dishwasher before."

"Yeah," I concede, duly chastened. "But it was there when we bought the house and it's twenty years old."

He nods and starts reading the price tags out loud. Very informative.

Two more customers walk in and Salesman One stops, scans the store and frowns. "Hang on a minute. I need to get somebody else to help you. Everybody's just sitting around on their butts."

So he sends Salesman Two. Salesman Two approaches, feigning mild interest in possibly making me go away after he has done his duty and read me the requisite number of price tags. He shows no sign of flirting with me like the guy at Sears who sold me my expensive Dyson vacuum cleaner - a man who knew how to sell an appliance to a woman.

Anyway, I'm fine with business is business. Besides it's my own fault - I haven't done my make up and hair.

So I tell Salesman Two my absolute cap/limit/rock top price which is already a hundred or two bucks higher than it really is and he shows me a model that costs more.

I salvage my dignity and tell him I am not asking him to. It seems to placate him a bit. He begins to warm up to me and by the time I leave has almost made me remember why I went in there in the first place:

The smart salesmanship. The service. The right product to meet my particular needs.

THE TALENT! Don't knock it.

Maybe I should tell Madame Tussauds to give the kids' friend a call.