The Causes of the Saints 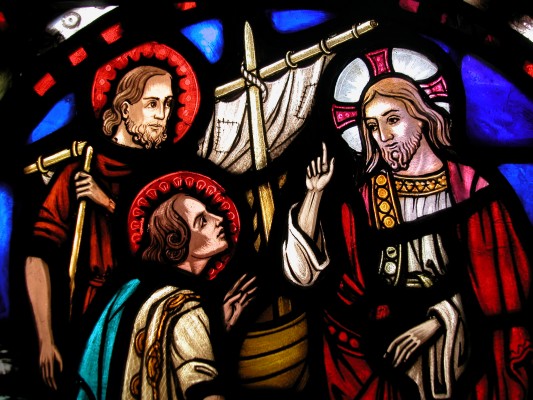 Day 8 of my trip to Rome with my husband's canon law class found us at the Congregation for the Causes of Saints, the dicastery responsible for the beatification and canonization of saints.  We sat in large, red, high-backed cushioned chairs around a large rectangular table.  Life-sized oil paintings of the recent popes hung on the walls, with a large photograph of Pope Benedict at the front.  Microphones lay on the table in front of each chair for whomever would like to ask a question.  I hadn't used mine yet in the previous dicastery meetings.  Maybe this time.

Monsignor Sarno welcomed us, and I smiled at his tri-state accent, as he sounded just like my dad.  He began by saying, "God sends messages to the world through his saints."  He stressed the importance of looking not so much at the pen that God uses, but the message that He conveys through that person.  He warned of the dangers of getting too caught up in the extraordinary experiences and details in a saint's life, which can sometimes distract us from the importance of a specific virtue that God is showing us through the saint.  I sensed immediately that I am guilty of that, as I sometimes even become despondent when I feel as though I could never live like a certain favorite saint because our life experiences are so different.  I leaned back a little so the Dominican sister to my left could see.

Monsignor spoke of why saints are so important to us as Christians.  He said it is through them that God gives us a concrete example in concrete history of what it means to truly live as a Christian.  Our faith is one, he said, but how we live that faith can vary widely depending on an individual's place and time in history.  This came as a big comfort to me, as I had always been a little bothered that I could never find "the perfect saint", the one whom I could emulate perfectly, the one who would take the guesswork out of the Christian life for me.  He inferred that we're not supposed to have a perfect plan--God wants our love and trust.  Interesting.  I gazed thoughtfully at the pictures of the popes.  Some of them looked like they had had a lot on their minds.

Monsignor explained the various stages in the process of canonization and how they look for miracles to confirm the status of venerable and blessed souls.  It was his job to investigate the medical miracles attributed to the intercession of the particular soul.  He told the story of his trip to Honolulu, where it was he who had to look into a miracle attributed to Father Damian.  A woman there who was told by her doctor that her cancer had spread all throughout her body and even to her brain and only had a few months to live, banged her hand on the table and said, "I'm going to talk to Father Damian about this!" and was instantly cured of all her cancer.  My jaw dropped as I imagined the scene and wondered at the woman's faith.  Monsignior Sarno added that they look for the medical healings to be full, perfect, and lasting, "as the Holy Spirit doesn't do a half-job".

Just as I was still marveling over the healing, Monsignor again mentioned that often people get too distracted by the fancy details--the "holes in the hands", the "flying" (levitation), bilocation, or even the writings of the saint--and miss the message of holiness that God wants to send, the qualities and virtues He wants to stress to the world through a particular soul.  I tried to stop thinking about the Honolulu healing and focus on what this good monsignor was saying, as he would certainly be the one to know.  In just a few short minutes he had helped breathe new life into my devotion to the saints, and give me more hope and courage to look beyond the details toward the virtue in that holy person's life.