Sticks, Snow, and the Delight of Being 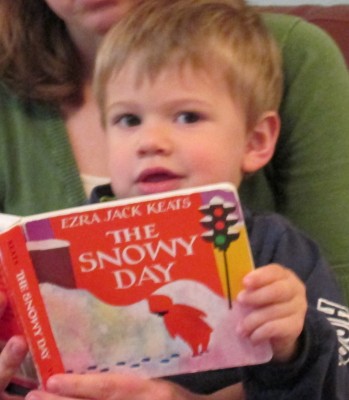 Sticks, Snow, and the Delight of Being

Our young son loves The Snowy Day by Ezra Jack Keats.  It's a good thing I also love this book, because he and I have read it, oh, 300 times in the last month.  Give or take.

This year marks the 50th anniversary of Keats' beloved picture book, originally published in 1962.  Winner of the Caldecott Medal, The Snowy Day is also famous as the first mainstream picture book with an African-American child as the protagonist.

It tells the story of a young boy, Peter, waking up to a world covered with snow as far as he can see.  As soon as possible, Peter is dressed in his red snowsuit and out the door to explore the transformed streets of his city neighborhood.

“I wanted to convey the joy of being a little boy alive on a certain kind of day—of being for that moment,” Keats wrote.  “The air is cold, you touch the snow, aware of the things to which all children are so open.”

So often children's books are written by adults thinking as adults, trying to teach some worldview, moral, or lesson, but failing to first enter into the world of a child, to see the world with a child's eyes.  But The Snowy Day explicitly does not do this.  Its sole purpose is to bring childhood delights to life.  For example:

And he found something sticking out of the snow that made a new track.

Well, what did Peter find? we might wonder. Keats piques our interest by waiting to reveal what Peter has discovered.  We turn the page and find that:

It was a stick – a stick that was just right for smacking a snow-covered tree.

At this my son grins.  “Stick!” he says knowingly, thumping the page with his thick finger.  Ben's favorite activity on our family hikes is finding sticks: long sticks, short sticks, thick sticks, thin sticks.  He, like Peter, knows that sticks are “just right” for doing things.

Another childhood delight depicted in The Snowy Day is the feeling of the world being so big.  The snow seems deep and grand, climbing to the skies:

heaping mountain of snow – and slid all the way down. 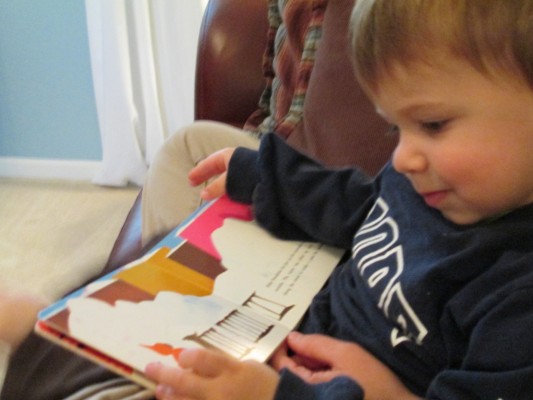 We climb the snow with Peter as the adjectives increase in size: great! big! tall! heaping!  In Peter's eyes, this is no ordinary pile of snow.  It's a mountain!

Of course, not everything goes as planned during Peter's snowy day.  He puts a snowball in his pocket to save for tomorrow.  But before he climbs into bed, Peter discovers that his snowball is missing. And “he felt very sad.”

Keats shows us Peter's conflict – fear of the snow melting away by morning – but does not belittle it by any misplaced irony.  It's a valid fear for a little boy, and Keats takes it seriously.  Peter's fears result in an upsetting dream, but he wakes up to a happy ending.  In the end, Peter's fears cannot long overshadow the joy he has in his snowy adventures.

We enjoy the artwork of The Snowy Day best of all.  Keats' collages are iconographic: as a religious icon makes spiritual realities present to us, the reader of The Snowy Day passes in a similar way through the artwork into a shared reality of childhood wonderment.  They are simple enough to leave room for the imagination, and bold and colorful, as Peter sees the world.

Poetic, innocent, and iconic, The Snowy Day is, I would suggest, a perfect book.  I think Ben and I can handle another 300 readings.

Believe You Have Been Made Clean!
Read
Yet What Can I Give Him?
Read
In the Bleak Midwinter
Read