Doubt in the Family 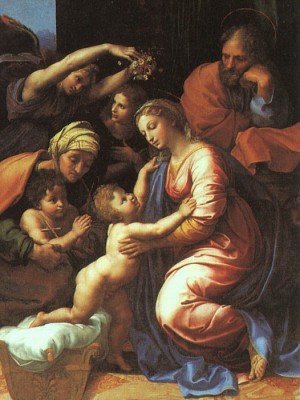 Doubt in the Family

On the cover of the July issue of Magnificatis a painting of Anna and Joachim, Mary’s parents. In looking at this image it occurred to me that there may have been a lot of doubts in this nuclear family.

The elderly Anna and Joachim were childless. Legend tells us that on one particular day the sadness of this situation overwhelmed Joachim. He left the temple and set off to the mountains to be alone with God. He wandered and lamented, doubting he would ever know the joy of playing with a child that he and Anna had conceived.

Anna heard about her husband’s tears. As his wife she would have spoken of her barrenness with him, and her doubt that in their advanced years they would ever have a son or daughter. Anna too went off by herself to pray. Would God answer her plea this time? Would he bring her beloved Joachim down from the mountains and into her empty arms? She doubted that her husband could endure the shame of childlessness much longer.

I can imagine their despair and hope colliding as they prayed. Hopelessness and trust were equally present in their hearts; reality nurturing one and faith the other.

That day God sent an angel to each of them. Anna was told she would conceive and the fruit of her womb would bless the world. A similar promise was made to Joachim. Did an angel really say they would have a child? They each had to see the other to share what they had been told. Falling into each other’s arms they knew by the joy in the other’s face that a miracle would take place and a child like no other would be born.

Anna bore a daughter and named her Mary. She and Joachim reared their beautiful child with awe and wonder at her grace and ability to grasp the roots of their Jewish faith.

Then one day their daughter, now a young woman, stood before them flushed with apprehension. How could they believe her fanciful story—that she was pregnant, but not by Joseph, her betrothed, not by a man; that she was impregnated by God?

This was their daughter and they knew her heart. God had whispered into this child a purity of soul. Very soon Anna and Joachim understood the magnitude of Mary’s claim.

Soon Joseph learned his young bride was pregnant. What would he have thought? How could he focus on his work? Imagine that poor man wandering the countryside looking for building materials and stopping to sit under a shade tree weeping about the sexual betrayal of his beloved. If there had been violence against her he would have known. To sleep with another man was so far beyond what this young woman would do. It was an action wholly incongruent with Mary’s nature, and yet there was proof. She was with child and it wasn’t his.

Anna and Joachim knew that Joseph needed to believe in a truth that they could not explain. He would have to come to know on his own terms with God a truth that never existed before. There was nothing they could say to remove the apprehension in Joseph. But they could give him time to nurture the seed of faith.

During this time Joseph wrestled with his doubts and prayed with an aching and weary heart. In his despair God came to him. God enlightened him of a truth so preposterous and outrageous that only God could have created it. So, too, did Joseph come to understand the magnitude of Mary’s claim. Joachim and Anna rejoiced knowing Joseph believed what they had known for months.

All of Mary and Joseph’s relatives heard of the child Jesus. How many of them counted the months from marriage to birth? Did they have faith enough to believe that the angels had repeatedly come to Mary and Joseph—of the immense star—of the premonition to flee to Egypt—and stories of Jesus as a young man and his miracles?

Not all of the family accepted what they heard. A seed of growing disbelief prevailed among the relatives. They knew Joseph, the carpenter, and Mary had grown-up like any of the other girls. The seeds of doubt grew so much that Jesus was blocked from sharing his gift of healing with them.

If there is anything we can learn from this bit of history is that doubt is a part of human nature. We must and will wrestle with it because a seed of doubt is the same size as a seed of faith, the greater growth is in which we nurture. God entrusted us to nurture faith.