Book Review: How to Defend the Faith without Raising Your Voice 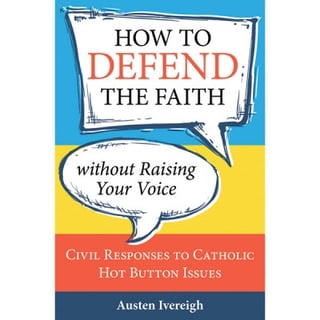 How to Defend the Faith without Raising Your Voice

This book recently caught my eye because the title seemed perfect for the upcoming Year of Faith that begins this October. So I picked it up and started to read, and I am so impressed with the book that I decided to write a book review about it.

How to Defend the Faith without Raising Your Voice: Civil Responses to Catholic Hot-Button Issues by Austen Ivereigh is a must-have Catholic resource for our current cultural and political climate.  This Catholic book is a great primer for the Church view on a variety of troublesome issues, and its short, info-packed chapters make it a great reference book too.

Why you should read this Catholic book, in a nutshell:

In case you haven't noticed, the Roman Catholic Church and its bishops have been in the news media a lot lately, and that won't be changing any time soon. The HHS Mandate and religious freedom, the Affordable Healthcare Act (a.k.a. Obamacare) and abortion, gay marriage and traditional marriage, etc. are all incredibly divisive issues in our current cultural climate.

With these issues all over the media, it's simply impossible to avoid at least some discussion on these topics with people you know.  Some of these topics have probably already made their way into your relationships with friends, co-workers, and family—and I bet at times it wasn't too pretty.  So when these topics inevitably arise, how do you know what to say, or how to say it?  Or, for that matter, how do you know what to believe amongst all the media whirlwind and opinion pieces?

What Makes This Book Different

When I studied philosophy and theology as a grad student, one of my professors would always ask us, "What are they worried about?” Whenever we examined another person's position or theory, we weren't allowed to flippantly assume that viewpoints we disagreed with were stupid. In order to successfully refute a position we disagreed with, we first had to understand what the concerns were of the person who formulated it. This involved asking questions like, What were the proponents of the view trying to avoid?  What questions were they trying to answer? This book does precisely that.

When people in the media (or your friends, or your family members) object to Church teaching, this book suggests that you begin your response by identifying the "positive intentions" behind the criticisms. Many criticisms against the Church appeal to a shared value that can be affirmed by both sides. For example, people on both sides of the above hot-button issues typically believe in upholding the dignity of the human person. Where the disagreement lies is in which policies promote this and should be pursued, and which destroy it and should be avoided. Once you can identify and articulate the shared values, it becomes much easier to continue the discussion as defenses go down and a true dialogue begins. The goal is not to win a fight, but to persuade others of your view by offering good reasons for it.

One example taken from the book will illustrate this approach.  When discussing euthanasia, the book points out the positive intention of those who advocate the practice. For one, it is widely believed that relieving the pain of others is the compassionate thing to do.  We can all agree that this is true in many cases, and that those who are sick and suffering should be cared for appropriately. This is the beginning of dialogue.

However, it can be argued that euthanasia doesn't merely relieve pain—it helps people to die sooner as a means to avoiding the pain, which is quite another thing.  Euthanasia also sees suffering as meaningless, and death is often chosen to avoid the inconvenience of prolonged suffering. However, the Church teaches that it is wrong for a person to take their own life and that suffering is never meaningless; on the contrary suffering has redemptive value and is a part of human dignity, while killing is not. Euthanasia is therefore a false compassion; true compassion is tender and loving care for the dying. While you may not completely persuade someone to your view of suffering, you may at least get them to concede that the Church's position is much more than “opposing a person's choice to die” or other negative ways the debate is usually framed.

Why is this helpful?

These are fundamental cultural and religious issues that people are quite opinionated about, and as such conversations that involve these topics get heated fast.  Yet these conversations are incredibly important to have, because the answers to these questions shape society itself.  So instead of having an emotional or knee-jerk reaction, getting red in the face, or avoiding these topics altogether, it's best to learn for yourself what the fuss is all about.

How to Defend the Faith without Raising Your Voice: Civil Responses to Catholic Hot-Button Issues is an excellent and timely Catholic book that will help you to have a thoughtful discussion by providing a no-nonsense, straight-to-the-heart-of-it treatment of each of these issues. And hopefully, the person who challenged Church teaching can leave the dialogue being much more open to the Church's wisdom than they were previously.

And Now for Raising the Kids - Star Charts
Read
Raising Saints or Martyrs? Meditating on the Mother of Maccabees
Read
Your Family and Cyberspace: Raising Saints in the Digital Age
Read