Laugh With Me: God’s Invitation to Joy 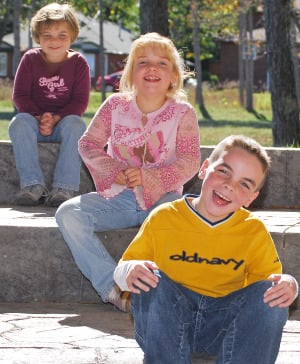 Laugh With Me: God’s Invitation to Joy

G. K. Chesterton once said, “Angels fly because they take themselves lightly.” What a beautiful concept; realizing that it is not us, but God that carries the weight of the world, thus making us free from the gravitational pull of our own importance. When I am in the company of great men and women of faith, I am often “awe” struck by their quick wit and sense of humor. I can only think that it is their humility, their absolute faith that God is so much bigger than they, that allows them to surrender entirely to His mercy and at the same time do so with a smile. There truly is a “lightness” to one who knows that he is nothing and God is everything. For those who believe they are everything, seldom wear such a smile of contentment.

As a society, we often look to God during times of trial and suffering, and although this is good, for sometimes God’s mercy is packaged in such a way that we are forced to stand up and take notice, at times it leads us to believe that happiness and laughter are separate from our relationship with our Creator.

Laughter is endearing.  It is said to “be the shortest distance between two people.” (See, that right there is funny, following a quote by Chesterton with one by Victor Borge… Now, if I could only find a Nipsey Russell quote…) But, Mr. Borge has made a very accurate statement. There is something about laughing with another person that draws us closer to that person, establishes a sense of trust and builds a sense of confidence. Just think of Sarah’s reaction as God informs Abraham that Sarah, in her old age, will bear a child. The second she laughs, she is drawn closer to God. In fact, He delights so in her humanity, which He created, He instructs them to name the child Isaac, the Hebrew word for laughter. Just think of how Sarah’s confidence in God grew as the child in her womb grew, and how her trust in the Lord intensified as the pains of labor intensified and she bore a son.

Genuine laughter cannot be forced.  It is something so true and so real.  It is something that shows us the Holy Spirit is working deep within us, at the sight of our innermost emotions. Think about the inner warmth you feel as you find yourself doubled over and tears flowing from your eyes in laughter. That passionate response of happiness that encompasses both body and soul can only be a mere foretaste of the happiness that awaits us in heaven. Many of our prominent and successful teachers in Christ have been aware of the importance of laughter on the human heart. Bishop Fulton Sheen believed that the very foundation of humor is the ability to “see through things.” He recognized that humor is a gift from God and taught, “God made the world with a sense of humor, in the sense that we are to see Him through His creation.” Isn’t that true? Don’t you feel at times that you can perceive how someone sees the world based on his sense of humor? (Or lack there of?) Mother Theresa said, “Peace begins with a smile.” How can one deny that? Imagine sitting at the signing of a peace treaty across from icky face snarling man. How confident are you that you have found peace? And, many of the saints saw God in the humor that surrounded their every day lives. When St. Teresa of Avila was knocked off her horse on her travels, she looked up toward heaven and said, “Dear God, if this is the way you treat your friends, no wonder you have so few of them.” Even our Lord, Himself, teaches, “Blessed are you who are weeping, for you will laugh” (Lk 6:21).  Is he not but giving us a glimpse of what awaits? Is he not showing us that truly being a servant of God results in a promise of gladness and joyous exultation? The humble man acknowledges sin in his life, repents, has a change of heart and becomes the loving recipient of God’s mercy. Could the final attainment of God’s mercy involve laughter?  What a wonderful thought. One of the Church fathers, Tertullian, as he defended the Church against Marcion, acknowledged that laughter is as much an accessory to the exulting and glad as weeping is to the sorrowful and grieving. “Therefore the Creator, in foretelling matters for laughter and tears, was the first who said that those who mourned should laugh; just as it says in the 125 Psalm ‘They who sow tears shall reap joy.”  How inspiring to think that, the goal for which we strive, heaven, is perpetual joyous exultation and absolute happiness (complete with belly laughs)!

The Bible doesn’t always describe every time someone laughs. In fact, not once in the Bible is it mentioned that Christ laughed, but I believe he did. I have to think that Christ, in the fact that he was 100% human, in itself indicates that laughter was part of his being.  Isn’t it wonderful to picture the smile upon his face and hear his laugh as he sits with his Mother and apostles at the Wedding in Cana, indeed a joyous occasion, or to picture him tossing back his head in laughter as he verbally enjoys a battle of wit and riddle with the Canaanite woman, and admiring her persistence says, “Oh woman, great is your faith!  Let it be done for you as you wish” (Mt 15:28). But one of the greatest stories to show laughter has to be the story of the prodigal son. Yes, of course I am aware that the story is a parable, but it is one that teaches so much on so many different levels. Think of it in terms of the 6th sense of which Bishop Fulton Sheen spoke, our sense of humor that which shows how we see the world. When the lost son “was still a long way off, his father caught sight of him” (Lk15:20). What did he catch sight of? What exactly did he see? He saw more than a dirty young man walking with his head hung low kicking dirt.  He had the sense to see past the ridiculous and see the joyous. He saw a son who had learned a hard lesson, and in the end had chosen the right path and found his way home.  Think of that father’s joy as he “caught sight” of his son. I just picture an old rollie pollie man with a gray beard, initially looking up and seeing his son, clasping his weathered hands together and in a great laugh calling out (maybe only to himself), “Hey… Hey… Look who’s here!” And, then with a big joyous belly laugh, he runs to his son and embraces him, no doubt with a smile from ear to ear, and if that weren’t enough, he throws a wild celebration in his son’s honor. How could he not be just giddy with laughter? How too must our souls rejoice as we find our way home to our heavenly Father.

As we reflect on God’s grace experienced through a laughing heart, may we always be mindful that this wonderful gift of laughter was given to us by one who loves us beyond compare as perhaps a glimpse of the absolute joy which awaits us in the Beatific Vision.  May we always find a way to imitate ‘Chesterton’s angels’ and take ourselves lightly, and may we remember the words of Sarah as she said, “God has given me cause to laugh, and all who hear of it will laugh with me” (Gen 21:6).