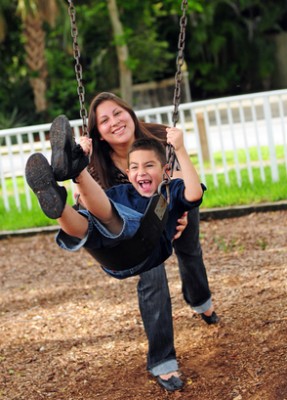 We’re lucky our oldest, Ian, made it out of my womb alive. Born two months early, breech, and strangled by his umbilical cord, Ian is currently with us by the grace of God and the skill of our OB-Gyne doctor who performed an emergency double cut C-section.

The slight oxygen deprivation and related minor brain damage caused Ian to experience significant developmental delays in physical abilities. In 1st grade, for example, he was operating at the level of a three-year-old and could barely catch a ball; a bit tricky socially for a boy.

But God is good. And the brain is able to work around deficiencies and even correct them with early intervention and great occupational therapists. Although he will certainly not be the star of the football team, Ian achieved age level scores in his physical abilities by age eight. However, to maintain the gains in his therapy, the OT confirmed that the exercises must be replaced by regular physical activities.

With Ian’s bilateral cochlear implants he was not given medical clearance to participate in high contact sports like soccer, basketball and football. But the real problem is that he preferred not to move. Left with his own devices Ian would have spent all of his time in sedentary activities like playing video games, reading, playing legos, and now listening to his iPod.

Enter the “Marian push”. I couldn’t drag the kid to run outside or play with the dog. Like anyone, Ian didn’t like doing things he wasn’t particularly good at. But I could make sure he was always signed up for some sport so he would get moving, like it or not.

Tennis, swimming, and now cross-country all got the thumbs down, I-don’t-want-to response. As Ian got older he even pitted both parents against each other to try to get him out of the next dreaded activity.

But I didn’t budge.

As Ian worked through his fears in every activity, he developed steady practice habits. And he got better.

And he started having fun.

And he made some great friends.

And he’s overcoming the obstacle of the physical challenges he was handed out of the chute.

A tortoise rather than a hare, if Ian were to be given more time to develop these skills, he can likely play on the high school tennis, swimming, or track teams.

So, ladies, don’t underestimate the power of the “Marian push”. Like our Blessed Mother, exercising our power to influence what is right for our families regardless of the resistance we get will pave the way for them to be everything God intended them to be.

Catholic Women’s Guide to Healthy Relationships Tip: Figure out where you might need to exercise your “Marian push” and go ahead, push away.