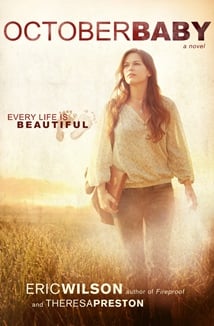 NASHVILLE – Sept. 4, 2012 – One of 2012’s biggest box-office surprises has spawned a novel that delves even deeper into the story and characters that moved so many hearts in theaters with its powerful pro-life message.

B&H Publishing Group, a division of Nashville-based LifeWay Christian Resources, published OCTOBER BABY the novel Sept. 1. The trade paperback, which includes a glimpse into Andrew and Jon Erwin’s hit film and a set of discussion questions, is available in bookstores and online at a suggested price of $15.99. An audio-book edition also is available.

“In OCTOBER BABY the novel, fans and newcomers get the same charm, the same uplifting story, with a whole lot more,” B&H Acquisition Editor Julie Gwinn said. “The deeper journey with these characters moves closer to the tagline for both book and film: ‘Every Life Is Beautiful.’”

Co-authors Eric Wilson and Theresa Preston take readers even deeper into the story of Hannah, whose increasing anxiety and sudden collapse point to the surprising circumstances of her birth. Hannah learns from her parents that she is adopted and the survivor of a failed abortion attempt. Along the way – through faith and friendship – Hannah finds that every life is beautiful, and that life can be so much more than what we may have planned.

Wilson is a New York Times bestselling author who penned the novelizations of the Kendrick brothers’ hit films Facing the Giants, Fireproof and Flywheel. Preston co-wrote the screenplay for OCTOBER BABY and co-authored Every Life is Beautiful: The October Baby Bible Study.

Directors Andrew and Jon Erwin transformed Preston’s screenplay into a major motion picture that premiered in the box-office top 10 this year and earned $5.4 million in limited release – more than six times its budget! That promptedEntertainment Weekly to include OCTOBER BABY among the 15 biggest box-office surprises of 2012 alongside megahits such as The Avengers and The Hunger Games. Entertainment Weekly said, “The film surprised analysts with an eighth-place finish in its debut weekend, after earning $1.7 million from 390 theaters. . . . what makes OCTOBER BABY’s run so impressive is that it reached that level with minimal media attention and no buzz in New York or Los Angeles, where many indies thrive.”

“OCTOBER BABY focuses attention on America's blind spot ...  admitting that aborting a child is cruel and unusual punishment for every person involved, including the baby who refuses to die,” said Judie Brown, president of American Life League and author of The Broken Path. “OCTOBER BABY will change you ... just open your heart.”