Not-Quite-Silent Motherhood: A Miracle in Our Midst 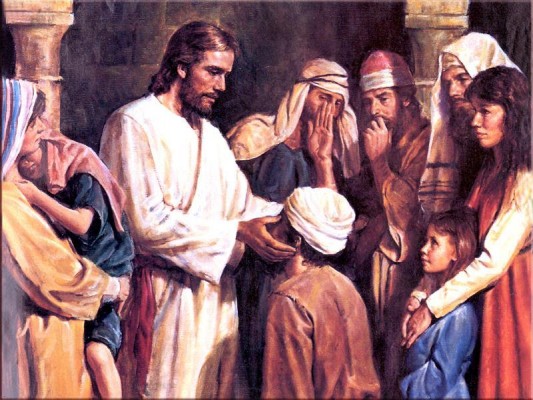 Not-Quite-Silent Motherhood- A Miracle in Our Midst

One of my favorite ways to engage the Gospel is to imagine that I am a peripheral character in the story. In this week’s Gospel,for example,  we encounter a man who is both deaf and has a speech impediment, who is brought to Jesus for healing. We read:

He [Jesus] took him off by himself away from the crowd.
He put his finger into the man’s ears
and, spitting, touched his tongue;
then he looked up to heaven and groaned, and said to him,
“Ephphatha!”– that is, “Be opened!” –
And immediately the man’s ears were opened,
his speech impediment was removed,
and he spoke plainly.

Listening to the story, I imagined what it would have been like to be this man’s mother. Imagine raising a child who could not hear her–but whose attempts to engage the world  were loud, unintelligible . . . and never-ending. Imagine what it would be like when that child grew into manhood. As his mother, she would have tended to his needs long beyond the time most children need their mothers. Well into the time when most children begin to contemplate tending to their elderly parents’ needs.

What must it have been like for her, to have been suddenly released from her role of caregiver? Did she feel a rush of relief? Unmitigated joy? Or was just a part of her a little worried about what her life was going to be like, now that her role (and her identity) was no longer so neatly defined. What were her son’s first words to her, once could express all the thoughts that had been bottled up in his heart?

All the healing miracles of Jesus were, strictly speaking, not primarily ordered toward the restoration of the human body. The healings were genuine, of course . . . and yet, the primary purpose of each healing was to point us toward something eternal. Often it was to reveal his divine power and authority toward a particular group of people, to liberate their bodies as a means to direct their attention toward their need for inner healing. This was as true for those who brought the man to Jesus as it was for the man himself.

The thing is, each time we approach Jesus, whether in his Word or in his eucharistic presence, we are reminded of that need for healing again. And I can tell you this with certainty: Nothing in forty-plus decades of human existence has reminded me of just how much I need that healing like parenting. Each fault and failing is magnified, until there is nothing to do but cast myself on the mercy of God, in full view of anyone who cares to watch.

As I thought about this, there in church, a loud moan rang out from the back of the sanctuary. A teenager, developmentally disabled and possibly deaf, was quickly led by her mother out of the church. Minutes later, they tried to slip back into the service . . . and quickly had to leave again when another eruption occurred. There was no miracle for this family, no possible way to remain silent and hidden in the pew. As a mom who has had to leave quickly from her share of services, I wanted to hug both of them and say, “Thank you for being here today. Your presence was a gift — you helped me to enter in to the story with all my senses, and see in a fresh way the miracle of Christ.”

NOTE: Would you like to learn more about lectio divine, the ancient spiritual practice of putting yourself in the Gospel scene in order to meditate on the story? Ascension Press recently released Walking Toward Eternity (and is in the process of developing a new faith formation program, Oremus), based on the ancient Catholic tradition of lectio divina. If you enjoyed Jeff Cavin’s The Bible Timeline or Quick Journey studies, check this one out!