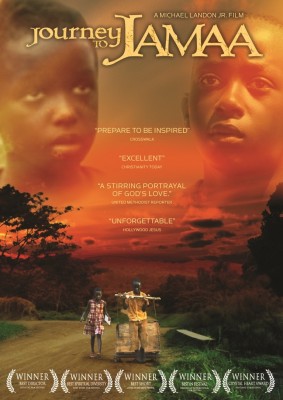 Seattle, Washington- Journey to Jamaa is an award winning film that chronicles the incredible journey of two orphaned children, Margaret and Derick, who are forced to walk through dangerous and life-threatening situations in order to find their only remaining family.  In a true story produced by the humanitarian organization World Vision, and shot on location in Uganda, director Michael Landon Jr. delivers a poignant and inspiring film in which a mother’s dying wish sets her two children on the seemingly impossible journey to find a relative they don't even know.

With only their mother’s last wish to guide them, Margaret and Derick push a large and mysterious box through the dangerous streets and highways of Uganda, in a journey that ultimately leads to the discovery of hope, family… and the very heart of God.  For more information or to see the trailer, go to www.JourneyTheFilm.com.

About WorldVision- World Vision is a Christian humanitarian organization dedicated to working with children, families, and their communities worldwide to reach their full potential by tackling the causes of poverty and injustice.  Motivated by our faith in Jesus Christ, we serve alongside the poor and oppressed as a demonstration of God’s unconditional love for all people. World Vision serves all people, regardless of religion, race, ethnicity, or gender.

Michael Landon Jr. – Director:  Michael Landon Jr., son of the late television legend Michael Landon, has been in the film business for over 25 years.  With two of the highest rated films in the history of the Hallmark channel, and several top ten releases targeted to the Christian market, Michael has become known for creating heartfelt, inspiring films that connect to the family.  He has developed and/or produced, directed, and written screenplays for Fox, CBS, NBC, Disney, Sony, Lifetime, and others.

Brian Bird- Writer/Producer : Brian Bird is co-founder with partner Michael Landon, Jr., of Believe Pictures, a film and television production company.  He was co-executive producer and writer on the successful television series, Touched by an Angel.  Adding to Brian’s success, he had also written and produced episodes of Evening Shade, Step by Step and The Family Man.  Most recently, Bird wrote and produced Gametime, a two-hour television pilot for NBC, The Shunning, inspired by the novel by best-selling author Beverly Lewis, for the Hallmark Channel, and Not Easily Broken, adapted from the novel by T.D. Jakes and released theatrically by Sony/TriStar.