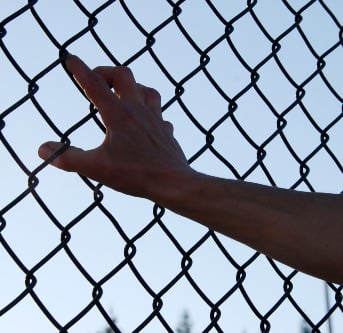 Yesterday, someone close to me shared the pain of his son’s incarceration due to drug abuse and brushes with the law.  Also this week, I received a letter from a prisoner sentenced to twenty years for meth. He was a graduate of St. Mary’s High school where my kids go.  After reading the Amazing Grace for Survivors I co-authored with Jeff Cavins and Matthew Pinto, he contacted me offering to share his own conversion story.

By all rights, he said he should be dead. Instead, by the grace of God, he has converted and wants to give the rest of his life to God and to help others.  I encouraged him to write his story which I hope to post on this website in the future.

I think that having a child slip away into a life of crime and/or drugs has to be the deepest pain. Cancer, injury and other physical hardships, are excruciatingly hard to watch our children suffer through. However, nothing can compare to watching helplessly as a child turns from God, risking eternal pain.

Below is a story of pain and triumph that was included in the Amazing Grace for Families book.  I interviewed Sherry Grace and ghost wrote her story, so we spent some time together. “Grace” is truly a fitting name for this lady.  Her strength and trust in God was inspiring and her love for others contagious.   I am sharing it here to support anyone dealing with a wayward child and to remind us all to pray for the conversion of sinners and their families who grieve for them.

Humming softly, I looked down at my young daughter and let out a deep sigh.  Thankfully, Angelina had drifted off to sleep.  I tucked her in bed and tiptoed out of her bedroom and into the horror from which I was trying to protect my little girl.  The police had paid our family yet another visit. With a search warrant in hand, they had free reign of our house, searching for drugs and illegal weapons.  Edmund, age eight, stood with my husband, Willie Lee.  I did not want him to be a witness to the scene, but being two years older than his sister, Edmund was not so willing to let me whisk him away under my protective wing.

“It wasn’t suppose to be this way,” I thought angrily.  I had gone from living the American dream to waking up in my worst nightmare.  There was nothing my husband and I would not do for our four children, yet our two oldest sons, Andre and Avery, were teenage delinquents.  They had become entangled with drugs and gangs.

I had wanted to do everything right for my children. I took a leave from my work as a model and interior designer in order to stay home to raise them. My husband provided for the family as a dentist.  His love and willingness to care for us knew no bounds.  We lived in a comfortable four-bedroom home in a suburb of Orlando, Florida.  Playgrounds and story time filled my days while the boys were little. When they reached school age, we sent them to private Christian schools. I drove to every field trip and rarely missed a Home and School meeting. I never thought I’d have to fight with the streets, but the lure of the wild side enticed my boys.  Venturing out of the sanctuary of our loving family, they were smitten with fast-talking, hard driving hoods.  Andre was first arrested in 1992 for breaking into a car.  Then months later Avery was arrested for breaking and entering.  In time, the police were banging at our door on a weekly basis.  Sometimes the boys ran into our house shaking with fear that some gang member was going to shoot them.

It was our oldest son that blazed the trail by joining a cousin into criminal activity.  Avery, ever the gentle soul, had been a “square” and called a sissy until it broke him down and he turned to the dark side.  As the boy’s lives unraveled, a wedge was driven between my husband and me.  The love that had been our glue was strained when he responded to them with love and indulgence. I felt he was sabotaging my efforts at discipline when he bailed them out of trouble.  The clashes between us were many.

How did we get to this point? I kept asking myself.  I prayed relentlessly.  The boys were in and out of jail.  Finally, I decided I could not let pride get in my way.  Instead of trying to hide my pain, I began asking everyone I knew to pray for them.

It did not happen overnight, but gradually, they surrendered to God.  While they were in their twenties, both began to turn to prayer and the Bible.  For a time, Andre straddled a line between God and the streets. He was married with a two-year-old son and two weeks away from receiving a dental technician degree when he was arrested one last time.  In the halls of the courtroom, his son ran up to “Daddy” but a guard stopped the two from having any contact. Seeing the pain and confusion in his little boy broke Andre’s heart.  While serving his six-month jail sentence, his wife gave birth to their little girl.  He knew his own pain was nothing compared to the pain he had caused others.  Andre knew he had to choose to serve God and God alone. He turned his back on the streets nine years ago and has never turned back.

Andre, age 32, is now a loving husband and father of three children.  God has turned his life around so completely that he is a church and youth leader and works with senior citizens.  Andrea has also been a keynote speaker for correction programs.  As a motivational speaker, he has spoken before judges and police officers that once knew him as a criminal.

Avery currently suffers from a mental disability, and is in a state hospital.  Thus far, medication has not been able to help him.  But my heart is at peace.  One of the nurses told me that when he is in reality, he reads his Bible and is often on his knees praying.  During their days in trouble, I often prayed: “If my sons should die in the street and I am not there, let them call your name before they close their eyes.”  Avery knows God and loves Him so my prayer has been answered. I know that Avery’s suffering is not wasted.  I am as proud of him as my other children.

But my story is not just one of conversion for my sons.  Their experience has converted me in way that never would have happened without the pain.  When we turn to God, He does not just end the bad; He can use it for good.

During my years of anguish, I learned of so many other mothers whose hearts were being ripped apart by sons involved in crime. Typically, they were embarrassed and felt like failures. I came to believe that God was asking me to give these women the support of each other and of God.  With my husband’s emotional and financial support, I started Mothers of Incarcerated Sons on Mother’s Day in 2001.  On a shoestring budget and with volunteers, we are now in 120 prisons in 32 states. MIS does everything from starting support groups for mothers (and fathers are welcomed too) to help find jobs for paroled prisoners.  Sons, who are released from prison, are encouraged to come to the support groups and pray with the other mothers who still have sons incarcerated.  Prayer and a mother’s love are powerful gateways to a new life.

I often visit prisons and tell the inmates, “You mean so much to God that He set you aside from the distractions of the world.  You are in a university of learning now where you can listen to God and prepare yourself for His service.”  They can make their failure temporary and move from pain to providence to power, by the grace of God.

This grassroots effort just keeps growing.  We have not received any major grants but we appeal to churches to make a monthly financial commitment to help us do God’s work in the prisons.  God is our CEO. It is He who can change hearts and set us free.

In 2002, Essence Magazine listed me among the “Fifty Most Inspiring African Americans” and then in 2004 selected me as one of the “Thirty Most Beautiful Women in the World”.   Like so much of my life, it’s something I never dreamed of.  I accept the title most humbly because it helps publicize our program and focuses on my own source of inspiration—God and love of family.  With such inspiration, anything is possible.

Sherry Grace is the founder and Executive Director of Mothers of Incarcerated Sons, Inc., (http://www.mothersofinmates.org/) She has dedicated her life to turning the misfortune that plagued her household into a launching pad of success for countless families and men in prisons across the country. Sherry is the wife of Dr. Willie L Grace, Jr., and together they have four children, Andre 35, Avery 33, Edmund 27, and Angel 26.  She is the grandmother of three, Ashley, Dante and Allurah Grace