Today, we're excited to give our readers the opportunity to win one of three copies of the DVD version of this summer's critically acclaimed movie For Greater Glory. To enter, please leave a comment below by midnight Pacific time on Monday, September 24, 2012. 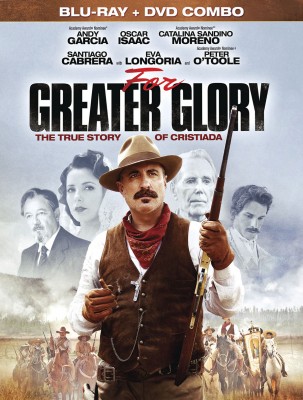 Public-screening opportunities are varied:
• Any group can benefit from public exhibitions of a film that enjoyed national buzz – but in limited theatrical release. Many moviegoers never got a chance to see this amazing film because it didn’t come to their town. Now, through a site license, it can!
• Priests and other parish leaders can organize a parish movie night. They can buy a site license package and host one (or multiple) parish viewing nights.
• Movie nights and public screenings sponsored by Knights of Columbus councils. Several Cristero martyrs were Knights, including a priest.
• Diocesan and parish Hispanic Ministries can bring this story to audiences that are extremely interested in and excited about FOR GREATER GLORY. This film is the legacy of many Mexican-American Catholics.
• Groups for young adults and men will find the film very compelling because of its message, production values and cast. The film stars Andy Garcia and Eva Longoria, two of most popular actors in today’s culture, and it’s an adventure, romance and action film all rolled into one!
• Faith formation and prayer groups get an opportunity to see the true story of 20th Century martyrs on the American continent. Several of the martyrs depicted in this film were beatified just five years ago. A great film to see on the faith and the heroic witness of our Catholic Saints.
• FOR GREATER GLORY also tells a great story of female strength and service through the depiction of the Feminine Brigades of St. Joan of Arc, which grew to more than 25,000 strong in support of the Cristero fighters.

Catholic leaders have praised FOR GREATER GLORY for its message and production values.

“FOR GREATER GLORY is a top-flight production whose message of the importance of religious freedom has particular resonance for us today,” said Most Rev. José Horacio Gomez, Archbishop of Los Angeles. “It is my earnest hope that people of faith throughout our country will rally behind FOR GREATER GLORY, and in doing so, will highlight the importance of religious freedom in our society.”

“FOR GREATER GLORY is ‘must-see’ viewing for all those who care about faith and liberty today,” said Knights of Columbus Supreme Knight Carl Anderson.

“The power of this film is matched only by the timeliness of its message,” said CatholicVote.org President Brian Burch.

“Every person of faith should draw courage from the tragically heroic witness of the Cristeros,” said Fr. Andrew Small, National Director of the Pontifical Mission Societies. “Their sacrifice reminds us that unless we learn from history, we risk repeating it. Besides being an important movie, it is extremely well done.”

COMPANION BOOK
Ignatius Press has published the official companion book to the film,For Greater Glory: The True Story of the Cristiada. Written by noted Cristero War historian and expert Ruben Quezada, English and Spanish editions of the book are available now at www.ignatius.com.

Today, we're excited to give our readers the opportunity to win one of three copies of the DVD version of this summer's critically acclaimed movie For Greater Glory. To enter, please leave a comment below by midnight Pacific time on Monday, September 24, 2012.

Update: Our winners, Dani, Gracie and Holly, have been notified and will be receiving their prizes soon. Thank you for participating in this contest.