Breaking Through: Don't Judge a Book by It's Cover 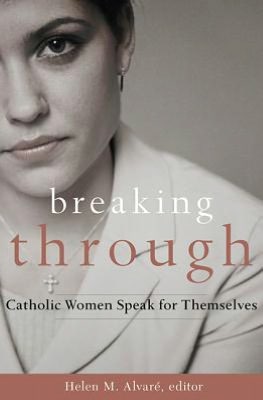 Breaking Through: Catholic Women Speak for Themselves

Editor's note: Today, I'm thrilled to welcome this guest review by Jeff Miller, my friend and the genius blogger behind The Curt Jester.  Jeff's review of Breaking Through: Catholic Women Speak for Themselves piques my interest in a book that's been on my "to read" list since I first heard about it. LMH

Being part of the Amazon Vine program I eagerly scan through the books and other merchandise available for review when they send out their emails.

Recently one book I saw was called Breaking Through: Catholic Women Speak for Themselves

.  Seeing that title the thought that came to me was if there was one book that had about zero chance of catching my interest this was one.  Sounds just like a title given to a typical Catholic dissent-fest.  Later the same day on EWTN I heard the same book referenced in a positive manner, so I dug up the email from the trash and had them send it to me.

Considering all the media coverage and the  phony “war on women” meme  and the fact that Catholic women who are dissenters are constantly being presented to us this book is quite timely.  This book is partly a response to the attacks on religious freedom and how the narrative was shaped concerning Catholic women and the use of contraceptives.

This book in some ways could have been called “Surprised by the truth of the Church’s teachings on sexual morality” as it is partly a “Surprised by Truth”-like format of conversion stories.  Not the common Protestant-to-Catholic conversion stories but mostly concerning Catholic women who were in opposition to Church teaching and who came to see the wisdom and the truth of her teaching.  These women from a variety of backgrounds and professional experience not only provide the genesis for how they came to accept Church teaching, but explain those teachings in a very accessible way.  All of these chapters were very well written and had me quite captivated by their personal stories. Along with these stories are also a couple of essays that go with the subject at hand.

Seeing how God worked in these women’s lives was a joy to see and a couple of the stories related really had me praising God – which unfortunately is not something I do as much as I should.  The story of one women’s affect on another headed to get an abortion is worth the price of the book – just so awesome! This book covers a lot of topics including: fear of children, contraception, same-sex attraction, beauty, the ends of dating, the sexual abuse crisis, stable marriages and family life, etc.

Even as a man I could relate to some of the background of the stories on how secular feminism had shaped their lives.  Being raised in a house that subscribed to Ms. Magazine and Psychology Today and where Alan Alda was the pinnacle of what a man should be — it is not just women who get subverted by this message.

This book is a great antidote to so much of what we hear and it presents faithful Catholic women who can fully articulate their faith and who have had the same struggles as so many others.  Maybe the title that confused me is a positive thing and I sincerely hope that those who struggle with the truth of what the Church teaches will pick this book up.  They might be seriously challenged by what this book presents, but they won’t be talked down to or feel attacked by it.