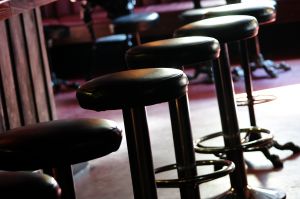 Claire Fisher, a Catholic Young Adult, made the 60-mile drive from her home in Kankakee, Ill., to Downers Grove, Ill., to attend an event with other young adults on Wednesday February 15, 2012—a mix of emotions.

She decided to make the long trek because there had been no young adult ministry events available within the Kankakee area that she was aware of. Although nervous about what to expect, Fisher had come to realize that by attending the event in Downers Grove she might be able to talk to others her age about her faith and in turn feel a connection with people she had not met before.

Soon on Wednesday Fisher joined about thirty young adults in their 20s and 30s who flocked to Another Round Bar and Grill, located at 5141 Main St., Downers Grove. The event was the monthly “Films, Food, Fun, & Fellowship” sponsored by St. Scholastica Catholic Parish in Woodridge, Ill.
According to Corinne Steagall, coordinator for the Southeast DuPage Young Adult events, the organizers were excited to offer young adults the opportunity to come together to watch a Christian film and have faith-led discussion afterwards.

“We find that having it at a bar or place that serves food tends to work out better for this age group,” Steagall said.

“It is about meeting new people and getting more involved in the church but by baby steps,” Steagall said. “So maybe they don’t know what we’re doing but there’s a bigger picture here what we’re trying to accomplish.”

Jerry Christensen, a deacon at St. Scholastica Catholic Parish, oversees the Southeast DuPage Young Adults group. This group serves young adults throughout the Diocese of Joliet. Christensen, despite his senior citizen status, relates to young adults and enjoys organizing events for them.

“My interests and activities are different than people my age and more in sync with the younger people,” said Christensen.

In August 2011, Christensen and Steagall held a leadership meeting to choose 10 movies that “we thought would generate a good discussion after,” Christensen said.

The film they chose for the month of February was “Fireproof” — a movie about Caleb Holt, a fictional captain at a fire station in Albany, Ga. While he is at work, Captain Holt lives by the saying, “Never leave your partner behind.” At home, he approaches his marriage differently. The movie begins with Holt and his wife, Catherine, having many arguments about their marriage. As they enter into the beginnings of what could lead to divorce, Holt attempts to rekindle the love in his marriage by embarking on a 40-day journey to discover Christ’s love. Hence the title of the movie: Is it possible to fireproof your marriage?

In the darkened backroom of the Downers Grove pub, complete with two large screens and a private bar, the film, Fireproof, presented the themes of marriage, divorce, and love.

Carlos Santana, a Catholic Young Adult, has been part of the Southeast DuPage Young Adult ministry group for the past two years. Santana said he came to the fellowship because he wanted to meet people within his faith community and because he enjoys a good movie.

Participants had the opportunity to “learn different points of view … and it’s an atmosphere that’s conducive to live discussion versus being in a room or being in a church … [where] people are afraid to share opinions,” Santana said.

With beer and food in hand, attendees discussed the concept of sacrificial love and the symbolism of the 40-day journey.

“I thought the movie did generate a good discussion,” Christensen later recalled.

In addition to coming together as young adults to eat, drink, watch a movie, and have discussion, some, like Fisher, attended the event because they had an interest in starting a Young Adult Ministry group in their area. Since graduating from college in May 2011, Fisher said she had lost the young adult faith community that served her in college, but Wednesday’s event met her need for fellowshipping with like-minded Catholic believers and also reinforced the need to continue to seek out making such Catholic connections.

“I’ve realized that in order to feel that same connection with my faith that I did at school, I will need to seek out young adult faith sharing environments,” Fisher said.