I recently received an email update from Fr. Paola Padrini of iBreviary.com with the fantastic news that this wonderful tool for prayer is now available not only for nearly every conceivable mobile device, but also that it now provides a wealth of information about the Holy Land, thanks to their new partnership with the Custody of the Holy Land, the province of the Friars Minor founded by St. Francis in 1209 and charged with the care of the Holy Land. 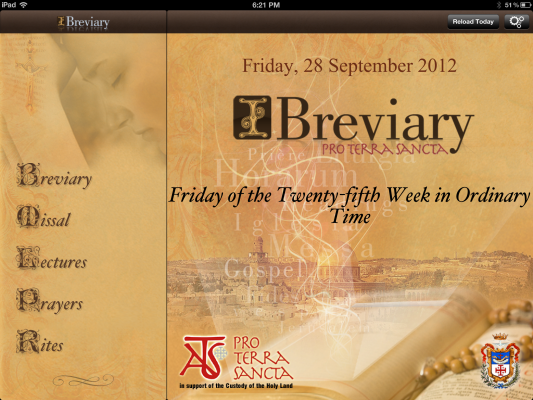 Honestly, it's been a while since I used iBreviary, so I was happy to download the newest version on my iPad. I was stunned when I opened it and discovered the beautiful interface which enables me to pray the Liturgy of the Hours and also contains a full Missal. But perhaps my favorite part of this new partnership and the updated app is the front page links to the website and blog of the Custody. Since traveling to the Holy Land last winter, I am keenly interested in the lives of Christians living there. Now I can easily remember to pray with and for them each time I open iBreviary, plus be kept up on the latest news from Israel. 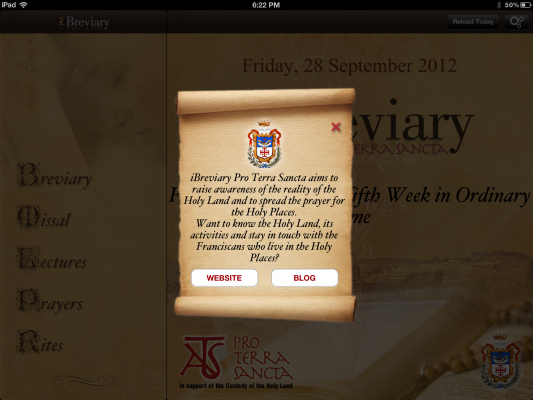 I invite you to take a look at iBreviary for yourself and am happy to share the following press release to give you additional details on this wonderful spiritual tool. This article highlights iBreviary's release for Android resources, but it's widely available for iOS, Kindle and Blackberry as well.

The application, the brainchild of Fr. Paolo Padrini, was made possible thanks to a strong and meaningful partnership with the Custody of the Holy Land. It was brought to fruition by the developer Libero Rodofili and the Italian companies Netguru s.r.l. and iLabora s.r.l.

Many new features are offered in this version: full support for English, Spanish, Portuguese (for which the liturgical texts are now being inserted), German and French, in addition to texts available in Latin and in the Vetus Ordo and Ambrosian Rite (nearing completion) versions.

A new mechanism for downloading texts has also been implemented, and it is now possible to download texts from successive days in different languages, or even the entire week.

From the homepage there is direct  access all of the sites linked to the world of the Custody of the Holy Land, allowing one, for example, to remain constantly in touch and up to date with the projects being implemented by ATS pro Terra Sancta. Another very important feature is the provision of Liturgical texts of the Custody of the Holy Land, which can be displayed by activating the appropriate selector.

iBreviary will also be appropriate for other religious orders (at the moment the Salesians, but texts for the Franciscan Family and other orders are also being prepared) who will be able to use their own liturgical texts. There is also now a function that enables the enlargement of characters.

This new version is compatible with Android devices (both smartphones and tablets), as well as the new Amazon Kindle Fire device.

The application can be downloaded from the Google Play Store and from Amazon: click here to download