Editor’s note: Thanks to our friends at Catholic Relief Services for sharing this important update. To donate or to learn how you can support CRS’ emergency response in this region or around the world, visit CRS.org. LMH

Policy makers to be urged to deal with growing drought corridor 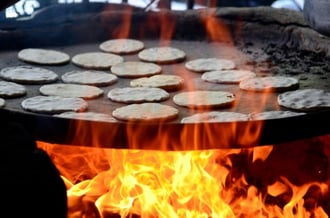 Maize tortillas cook on a roaster at a roadside cafe in El Salvador. Photo by Neil Palmer for CIAT

SAN SALVADOR, El Salvador, October 9, 2012 –  Higher temperatures and changes in rainfall patterns could transform the agricultural landscape of Central America, threatening the livelihoods of one million maize and bean farmers, according to a pioneering report released today that for the first time takes a specific look at the impact of climate change on a local level.

Published by scientists at the International Center for Tropical Agriculture (CIAT) and the International Maize and Wheat Improvement Center (CIMMYT), as part of a project led by Catholic Relief Services (CRS), Tortillas on the Roaster exposes the risks of climate change to these two most-important food crops in Nicaragua, Honduras, El Salvador and Guatemala.

“Even with our most conservative estimates, it’s clear that climate change could transform the agricultural landscape across Central America,” said Anton Eitzinger, a climate scientist at CIAT, one of the lead authors of the report. “Conditions are already tough there; it’s one of the poorest and most vulnerable parts of Latin America.”

Funded by the Howard G. Buffett Foundation, the report will be presented at a meeting of key Central American donors, policy makers and development organizations in San Salvador, on Thursday.

The impact on maize and beans 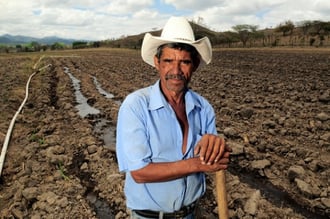 A farmer in Honduras takes a break from digging irrigation channels in Alauca, Honduras Photo by Neil Palmer for CIAT

The first study of its kind to make such highly specific, local-level predictions, Tortillas on the Roaster shows that an expected average temperature increase of around 1 degree Celsius by 2020 will severely affect maize, exacerbating water shortages and causing the plants to suffer from heat stress. Large swaths of the current maize-growing area could become unsuitable for the crop, resulting in economic losses to the region as a whole of around USD$ 100 million per year.

Crucially for maize, the biggest losses will occur where there is already severe soil degradation, such as in parts of Honduras and throughout El Salvador, which could see production slump by about one-third in the next 10 years. Meanwhile, higher temperatures could extend the region’s dry season, increasing the severity of the so-called “canicula,” a dry spell which starts in July, clashing with a crucial stage in the maize production cycle. 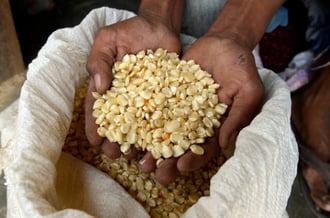 A handful of maize seed, on a farm in Nicaragua. Photo by Neil Palmer for CIAT

For beans, there is a serious threat of reduced rains during the planting season in September, with higher temperatures affecting flowering and seed production, which could reduce yields in all four countries by as much as 25 percent. Meanwhile, the typically wet months of October and November are likely to see even more severe downpours, similar to those that destroyed crops and infrastructure in 2011. The report estimates maize and bean production losses at about USD$ 20 million per year by 2020, with likely knock-on effects as retail value chains, and regional and export markets take a hit.

The report highlights the importance of environmental management, finding that farmers who employ good soil management practices, for example, will be able to buffer the impacts of climate change, and produce a variety of lucrative crops. Those in marginal areas, with poorly managed farms will be forced to change their practices or leave agriculture all together.

The report also predicts that some areas, such as the western-central highlands of Guatemala, are expected to benefit from the warmer conditions, increasing the suitability of maize and beans production. But many of the areas expected to gain in crop suitability are in ecologically fragile zones, such as forests and wetlands.

Overall, about one million smallholder farmers and their families could be negatively affected across the four countries. 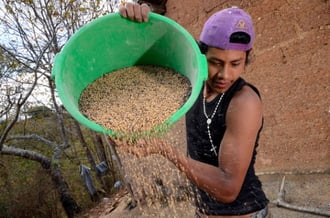 A farmer in Somoto, Nicaragua, winnows his sorghum. Photo by Neil Palmer for CIAT

However, the scientists suggest that with decisive action from policymakers, the worst can be averted.

“The report highlights that there is no quick fix,” said Paul Hicks, Regional Coordinator, Global Water Initiative-Central America, Catholic Relief Services.  “This is about getting back to basics. Extension services across the region need to be reinvigorated to train small farmers in soil and water management. And governments need to lead, they have the ability to make a real difference through setting climate-smart agricultural policies.”

Better use of rainwater – for example, through water harvesting systems – together with improved soil management, crop diversification and the use of sustainable and so-called “climate-smart” approaches could help farmers do more than simply weather the storm.

Using existing global and regional climate models, Tortillas on the Roaster researchers were able to analyze the impacts of climate change on local scales, ranging from 1 to 5 km2. They identified and mapped how different geographic areas within the four countries will be affected.

During 2011-12, the team organized a series of farmer workshops in the four countries to help researchers better understand farmers’ perceptions of the risks of climate change.

CIAT – Working with partners across the developing world, the International Center for Tropical Agriculture (CIAT) – a member of the CGIAR Consortium – develops technologies, methods, and new knowledge that better enable farmers, especially smallholders, to enhance eco-efficiency in agriculture – that is, make production competitive and profitable as well as sustainable and resilient through economically and ecologically sound use of natural resources and purchased inputs. With headquarters near Cali, Colombia, CIAT conducts research for development in tropical regions of Latin America, Africa, and Asia. For more information, please visit www.ciat.cgiar.org.

CGIAR is a global research partnership for a food secure future. Its science is carried out by the 15 research centers who are members of the CGIAR Consortium in collaboration with hundreds of partner organizations. For more information, please visit www.cgiar.org.

CIMMYT - Headquartered in Mexico, the International Maize and Wheat Improvement Center (known by its Spanish acronym, CIMMYT) is a not-for-profit agriculture research and training organization. The center works to reduce poverty and hunger by sustainably increasing the productivity of maize and wheat in the developing world. CIMMYT maintains the world’s largest maize and wheat seed bank and is best known for initiating the Green Revolution, which saved millions of lives across Asia and for which CIMMYT’s Dr. Norman Borlaug was awarded the Nobel Peace Prize.CIMMYT is a member of the CGIAR Consortium and receives support from national governments, foundations, development banks, and other public and private agencies. For more information, please visit www.cimmyt.org.

CATHOLIC RELIEF SERVICES is the official international humanitarian agency of the Catholic community in the United States. The agency alleviates suffering and provides assistance to people in need in nearly 100 countries, without regard to race, religion or nationality. For more information, please visit crs.org or crsespanol.org.