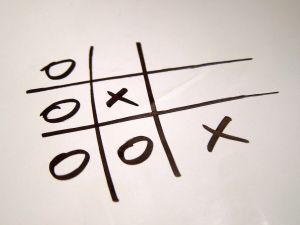 “Let’s go, blue,” parents cheer from the sidelines of the Varsity CYO soccer field. Just a little further and the girls will get their first goal of the game. The ball travels up the field, and “blue” takes a shot at the goal. But the goalie jumps and tips the ball away. The whistle blows. End of the first half. The girls in blue jump up and down, hug each other, and congratulate each other on all their effort.

As I watched them high-five each other and gather around the coach for further instruction, I marvel at their attitude. Though the team hasn’t won many games this season, you would never know it.  No matter what the score is, they’re cheering each other on. “Great job out there,” they’ll say to a newbie on the team who is just learning the ropes.

Once, on a cool, rainy, fall night during a game, one of the girls fell and injured her leg. You could see her struggle to keep her head out of the muddy grass. As her teammates surrounded her, one of them ran behind her and held her head for her.  The girls lost that night, but they cheered each other on once again. Not once did they cast nasty looks at the opposing team. Instead, they displayed a good Christian attitude. They then hugged each other and yelled their team name with pride. They rejoiced in the accomplishments they did achieve.

Their team spirit is one I haven’t seen every day.  Although they haven’t won the most games in their division, this team truly is a winning team. As a Christian, it takes more than just pure skill to be a “winner” in sports – or anything we do.  I’ve learned from the girls that no matter what, it’s worth the effort to keep trying. Rejoice in your successes instead of dwelling in what you didn’t achieve. The girls have learned a valuable life lesson early in their lives. They’ve learned what it takes to truly be a winning team!

A Winning Team: Pope Francis and Our Lady
Read
Winning
Read
When Failing is Winning
Read