A Spiritual Classic: The Secret Garden by Frances Hodgson Burnett 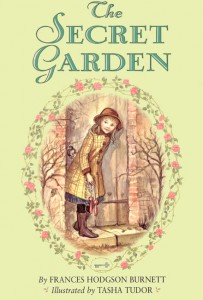 A Spiritual Classic: The Secret Garden by Frances Hodgson Burnett

When it comes to writing about why I love The Secret Garden, it's hard to know where to start.  I could talk about how the book is largely responsible for turning me into a hard-core, lifelong Anglophile.   I could explain how it's the story that first introduced me to  Gothic literature, to the eerie deliciousness of a huge English manor house with winding passageways and cries in the night.  I could go on and on about the edition I had as a child, with beautiful illustrations by Tasha Tudor: the picture showing Mary Lennox breathlessly turning the key in the ivy-framed door; the image of the country boy Dickon sitting on the grass, surrounded by woodland creatures;  the scene where Mary discovers the invalid Colin, his head lit up in an eerie candlelit glow.

Or I could talk about the story of this book, one that held me spellbound the Christmas that I was ten.  An orphan girl is sent to a cold forbidding Yorkshire manor house, where she discovers the walled garden that has been shut up for a decade.  She finds the key, goes inside, and discovers that although the garden may look brown and abandoned,  it's not dead; there are green shoots coming up through the carpet of dead leaves, and the roses are "wick," or alive.  With the help of one and then two and then three friends, she secretly tends the garden and brings it to joyous, colorful, vibrant lushness.  And in the process, her own cramped soul expands and grows into happiness.  A sickly boy learns to walk again, and a remote, depressed father learns to embrace life, not run from it.   It all happens because of a garden that once seemed dead but which holds in its soil a potential for healing that no one in the book could have foreseen.

And really, it's this spiritual message that makes this book so moving to me now, almost thirty years after I first lost myself in its pages.   Isn't that the Christian story right there? -- out of death, there is life; out of despair, hope.  Nothing -- and no one -- is too far gone to be reclaimed and brought to his or her fullest, most beautiful potential.  It's a message that  I see every spring in the garden, as I watch the roses that were once barren and stubby explode into color and fragrance.  I could live to be five hundred, and I'd never get bored by that.  Every single spring, it thrills me to watch the slow return of those shiny reddish-green leaves, then the buds, then the petals, all pushed into being by some force that I can't see but which feels, every time, like a miracle happening just outside my windows.

This book celebrates that force, that miracle, in all of its manifestations.  And the characters all hunger for that miracle, whether they are conscious of it or not.   They all long for Life, and by the close of the book, they've found it.

And there is no happier ending than that.