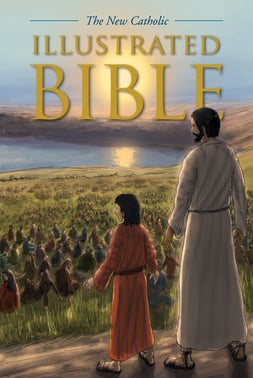 Editor’s note: Today, we continue our special three week feature for our readers. For each of the next few Wednesdays, I will be sharing with you an excerpt from the amazing new resource, The New Catholic Illustrated Bible. Published by Saint Benedict Press, edited by Amy Welborn, and masterfully illustrated by Lars Frederiksen, this newly released Catholic edition story Bible is a treasure that belongs in every home. For the next few weeks, we’ll be sharing stories and illustrations directly from The New Catholic Illustrated Bible. I hope you enjoy them, and that you’ll strongly consider making this beautiful resource a part of your family’s spiritual library. LMH

THIS is the history of Noah. Noah was righteous. The Lord considered him blameless among the people of his time. 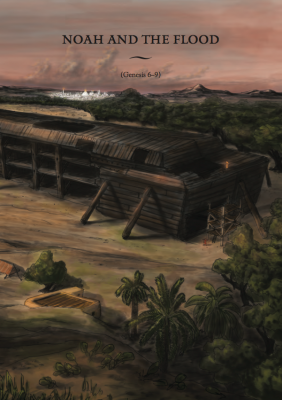 Noah and the Flood

The earth had become corrupt and was filled with violence. God looked upon the men of the earth and saw how they had corrupted the whole earth with their evil ways. But one man named Noah walked with God. He had three sons: Shem, Ham, and Japheth. God said to Noah, “I see that the end of all mortals has come. The earth is filled with violence because of them. I am going to destroy them and the earth. Make an ark of gopher wood, with many rooms, and cover it with pitch, inside and out. Build it like this: it will be 450 feet long, 75 feet wide, and 45 feet tall.”

“For I am going to bring a flood upon the earth, destroying everything under the heavens that breathes. Everything that is on the earth will surely die; but with you I will establish my covenant. You are to enter the ark with your sons, your wife, and your sons’ wives. You will bring into the ark two of every living creature, male and female, to keep them alive. All the animals and birds will come to you to be kept alive. You must take every kind of food that you and the animals will need to eat.” Noah listened and did what God commanded him.

Then the Lord said to Noah, “Now come into the ark. You and your family may come, because I have seen how you are righteous even in this corrupt world. Take with you seven male and seven female of every clean animal. Take with you two of every kind of unclean animal, both male and female. Do all this so that the offspring of all the animals may continue. In seven days I will send rain that will last forty days and forty nights, and every living thing that I have made will be wiped off the face of the earth.” Noah did all that the Lord commanded him to do.

Noah took his sons, his wife, and his sons’ wives into the ark, along with all the animals, to escape the waters of the flood. Male and female pairs of all the animals, birds, and every kind of creature came to Noah to enter the ark, just as God said that they would do. Seven days later, it began to rain. For forty days and forty nights rain poured down upon the earth. 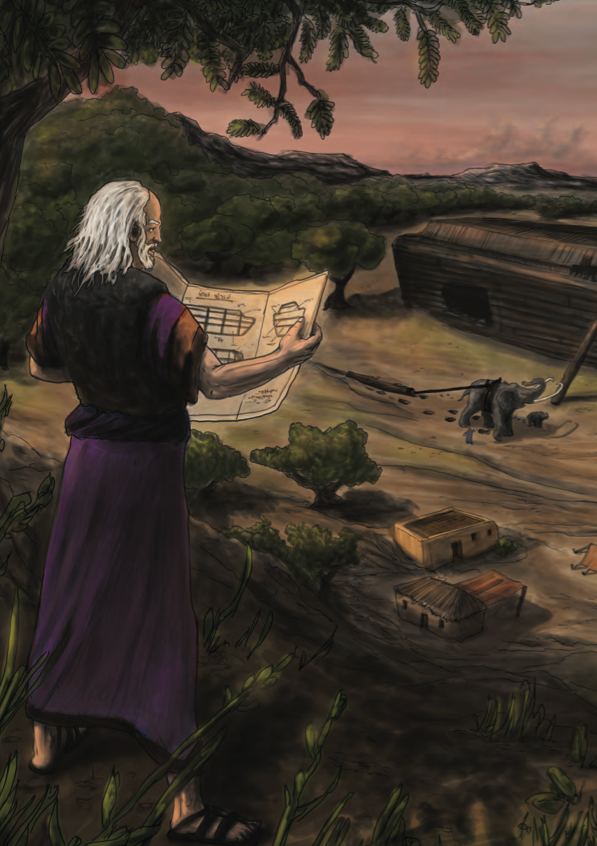 Noah and the Ark

Inside the ark were Noah, his sons (Shem, Ham, and Japheth), Noah's wife, and the wives of his three sons. With them were every kind of wild creature, every kind of livestock, every kind of creeping animal, and every bird with wings. Pairs of all of the animals that God had created, male and female, had come to Noah and entered the ark. God himself had closed the door. Now the rain kept coming down for forty days.

The waters got deeper and lifted the ark high above the earth. The waters rose even higher, and the ark remained safe on the surface of the water. Still the water rose higher; even the highest mountains were covered with water.

Outside the ark, every living thing that breathed died: birds and livestock, wild beasts and animals that creep along the ground, and also all the men. They were all wiped off the face of the earth. Only Noah and those with him on the ark remained alive. The waters remained on the earth for 150 days. 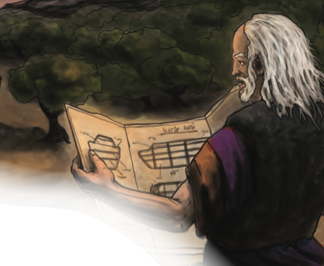 But God remembered Noah and all those who remained with him on the ark. The Lord caused a great wind to blow over the earth so that the waters began to go down, and the rain no longer fell from the sky. The flood waters continued to go down steadily for 150 days. On the seventeenth day of the seventh month, the ark came to rest on the mountains of Ararat. The waters continued to recede. On the first day of the tenth month, the tops of the mountains became visible.

At the end of forty days, Noah sent a raven out from the windows of the ark. The bird kept flying back and forth as the waters continued to decrease. Noah also sent out a dove, but it soon returned because there was no place for it to land. Noah took it back into the ark. A week later he sent out the dove again. When evening came, the dove returned with a freshly plucked olive branch in its beak. Noah knew that the waters were going down even further. One week later Noah sent out the dove again, and this time it did not return.

When the earth was dry, the Lord called to Noah, “Come out of the ark, all of you: you, your wife, your sons, and their wives. Bring out all the living creatures that are with you—the birds and animals that creep along the earth—so that they may multiply and cover the earth again.”

So Noah and his family and the animals came out of the ark. Noah built an altar to the Lord. He took some of each of the clean animals and clean birds to offer a burnt sacrifice to the Lord. The pleasant aroma arose to the Lord, and he said in his heart, “Never again will I curse the ground because of the sins of man, even though his thoughts are
evil even from his childhood. I will never again destroy all the living creatures as I did. As long as the earth remains, planting and harvest, cold and heat, summer and winter, daytime and night will never end.”

God blessed Noah and his sons, “Be fruitful and have many children. Make the earth full again. From now on, the animals of the earth and the birds of the air and whatever creeps on the ground or swims in the sea will be afraid of you. Every creature is now given into your hands for food, just as you have eaten the green plants; but do not eat meat that contains its life's blood. The lives of men are precious to me. Anyone, man or beast, who kills a man must be put to death. Whoever sheds a man's blood, by a man his blood will be shed. For in God's image he created man. Now, be fruitful and have many children. Spread out and fill the earth.”

For more information on The New Catholic Illustrated Bible visit the publisher’s website or order your copy through Amazon to support CatholicMom.com with your purchase.