The Soul of Sound and Screen 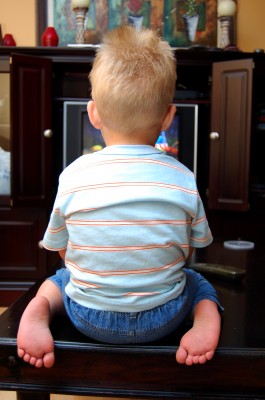 The Soul of Sound and Screen

We human beings become, in part, what our senses consume. Razor sharp discernment is needed to navigate through the spiritually noxious influences we consume through the mediums of movies, television, and music. With unholy images pounded into our minds, and unholy thoughts stirred into our senses and souls, many of us are unknowingly drinking a daily dose of poison, by tuning into the light and sound waves around us.

Just the simple modern-day act of turning on the T.V. today can make it hard for us to discern and follow the will of God for our lives. As St. Paul writes in Philippians 4:8, "Finally, brothers, whatever is true, whatever is honorable, whatever is just, whatever is pure, whatever is lovely, whatever is gracious, if there is any excellence and if there is anything worthy of praise, think about these things." But how can we possibly meditate on light streams from heaven, while at the same time, entertaining darkness within the world?

Evil disguises itself as something good, true, attractive, pleasurable, interesting, or exciting, so that we human beings will gravitate towards it, like moths to a lethal flame. Evil gains its power, when its true nature remains disguised and hidden. But unmasked, it loses ground, scurrying to escape the light and return to a dark corner, fearful of being stripped of its false promises and deceit, exposed for what it is, and banished. With this power of exposure in mind, I hope to pull back the attractive veil of modern music and entertainment, to show more clearly that all that glistens isn't gold.

Popular music today is doused with invisible, tasteless poison, often poured into a cup of pure, cool, fun. The iGoogle page, which pops up on my computer, features a new video every couple of days, and for a temporary escape from work, I clicked on the You Tube video of a new teen boy band's latest hit, "Let's Live While We're Young." Amidst scenes of wholesome outdoor, gleeful playfulness, the boys sang:

The band was called One Direction, and with all the teen fun unmasked, one can see which direction they're headed. They're unknowingly glorifying and spreading the joy of sin, which can sever a soul from its inheritance with God, potentially forever. But it's just a harmless beebop song, right? I found my foot tapping to it. My kid can listen to it on her iPod, no problem. . .right?

When tuning into a major radio station, one that funnels the pop and rock songs of the day, will we hear the name of the Lord, Jesus Christ mentioned? Will we listen to lyrics about living a wholesome, holy life? Will we ever sing to the tune of a top 40 hit, extolling poverty, chastity, and obedience?

Hollywood is a similar stronghold of the ungodly. The big cinema and television corporations, about twenty or so of them, refuse to have the name Jesus Christ mentioned within the movies and programs they produce. A Hollywood script may possess the words "saint," or "God," or "heaven," or "angel," but not "Jesus Christ," unless it is used as a curse word. The spirit moving behind-the-scenes, helping to produce the music, images, and shows, to which we are constantly exposed, is highly active and cunning. It knows us well. It knows we are deeply affected by what we see and hear in the music and entertainment industry, so much so that nowadays young people, by and large, seek to emulate the stars, not the saints.

A recent study, to be published in a forthcoming edition of Psychological Science, has found that exposure to sexual content in movies increases the chances of children adopting risky behavior later in life. Ross O'Hara, one of the authors of the study, has said, "Adolescents who are exposed to more sexual content in movies start having sex at younger ages, have more sexual partners," and, she adds, they are more likely to perform risky behaviors with casual sexual partners.

An article from Medical Daily also points out that other studies have shown that teen-centered films almost always have sexual content in them. And to 57 percent of American children, media is the only source available to get sex-related information and sometimes about how to deal with a complex emotional problem. Thus teens, at times, can't differentiate between reality and fiction, according to the Association for Psychological Science.

In the 2008 James Bond film, Casino Royale, parents and their open-mouthed children found themselves staring at a bloodied Bond, stripped naked and tied to a chair, being tortured by having his genitals beaten with a length of rope. The English movie critic, Jenny McCartney, wrote of her friend's dismay over witnessing his two young boys, aged nine and seven, diligently re-enacting the torture scene with an outsize teddy bear strapped to a chair and a flail constructed from a knotted dressing-gown cord.* The recent, July 21, 2012, midnight shooting massacre, by James Holmes, in Aurora, Colorado, during a screening of the violent Batman movie, the Dark Night Rises, points to a graphic media violence moving swiftly from fiction to fact, particularly among the mentally unstable. Investigators reportedly found a Batman mask in the attacker's booby-trapped apartment. Three other men were arrested separately during or after screenings of the same film, for dangerously threatening behavior related to it.* Would a showing of "The Donut Man," from EWTN, singing about Christian virtues, spark the same kind of response?

A United Kingdom organization, engagingly called CUT, for Catholics Unplug your Televisions, is one group of trying to raise awareness of the tentacles reaching out to us through the screen. St. Padre Pio, they point out, described the TV as Satan’s tabernacle. Also, St. Elizabeth Seton, the first United States-born canonized saint in the Roman Catholic Church (1774–1821) is said to have had a prophetic vision of the 20th century, in which she saw a black box from which Satan would enter people’s homes. CUT's logo shows St. Michael the archangel, in his classic ready-for-battle position, about to lunge his spear into Satan, as he emerges from a flat-screened (possibly even HD) television set.

I don't need a Ph.D. or the gift of discernment of spirits to notice that after watching a video on Jesus, my young son walks over to me and gives me a hug or a kiss, and after watching the TV show Power Rangers, he walks over and starts kicking me in my shins.

I don't need to read a study to support my inward observation of inspiration to holiness after watching a video on the life of the saints, and left feeling empty, with unfulfilled longings, unsettled even rattled inside after, after unsavory media exposure.

In just a few short years, we have travelled many leagues away from innocence. Sin, in entertainment, is the new normal. Not only do we tolerate it, we defend it. We demand it. We pay for it. We make time for it.

If all Christians were to turn off our television sets, ignore certain movies and songs, we could shut down the unsavory aspects of television programming, the music industry, and Hollywood itself, in a very short time.

Little boys have always played with swords and guns. People have always been sexually drawn to one another. But they have not always been bombarded with sexual fireworks and exploding firearms, from a tender, innocent age onward. For these innovations, we must thank the music industry and Hollywood, the industrious factories of dreams, now frequently devoted to churning out nightmares.

The poet WB Yeats once wrote, "In dreams begins responsibility," yet the power brokers of entertainment will never take responsibility for their most brutal and sensual dreams, so long as the paying public still flocks to the theater of lust and cruelty.

Let us unplug ourselves and pray. Let us turn off the light of the screen and tune into the real Light of the world. All the entertainment we could ever want--is in the Light of the One Who loves us most. When we reach the end of our lives, who is going to coil in regret, wailing, "Oh no! I should have watched more T.V.!" Now is the time to fill our days with God, so that come the end of our lives, we will look back with gratitude and joy over how we spent our precious little time on earth, staying glued to the only reality show worth tuning into . . . Almighty God.

*Red Ice Creations: A Beacon of Sanity from Northern Europe
Our attitude to violence is beyond a joke as new Batman film, The Dark Knight, shows (2008): The new Batman film reaches new levels of brutality, so why are we letting children watch it? Jenny McCartney looks at a society seduced by sadism.
By Jenny McCartney | July 20, 2012 Telegraph.co.uk
http://redicecreations.com/article.php?id=20800