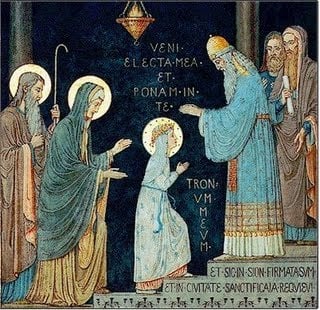 Presentation of the Blessed Virgin Mary

Psalm 150 is the last of the Psalms and it is a great Alleluia Psalm with all the musical sounds that were created by the instruments used in the Temple to glorify God. There was also dancing connected with celebrations. This is a most fitting introduction to the feast honoring Mary’s presentation in the Temple at the age of three. This is the story created in one of the more appealing and beautiful among the apocryphal writings written after the New Testament. It is told in the Protevangelium Jacobi or Proto-gospel of James the brother of the Lord. According to this narrative Joseph had other children whose names correspond to those found in the Synoptic Gospels. The Eastern Church celebrated this feast first. The Roman Catholic Church did not believe that Joseph was married to another woman who bore him sons and daughters. He too is considered the virginal spouse of Mary and both were in a marriage that followed Jewish law. The messianic lineage would stem from Joseph and not from Mary though the Protevangelium Jacobi does mention Mary as being of the house of David.

Mary is said to have approached the stairs of the Temple surrounded by young girls who formed a column on each side of her as she ascended the stairs. They were there to lead her focused on the Holy of Holies and helped her from turning back to look at her parents, Joachim and Ann. She dances on the third step….”and all of Israel loved her.”

What a magnificent line for our dialogue with the Jewish people today. The author of this apocryphal work did not know the precise details of the Jewish rituals and customs but did create his story to give us a type of sketch of Mary’s earliest years before the birth of Christ.

The story actually ends with the Incarnation or the Birth of Jesus Christ of the Virgin Mary. The document also affirms the perpetual virginity of Mary before during and after Jesus’ birth and thus is the first witness to that belief. The Eastern Churches do not deny this and speak of Mary as the always holy Virgin (aiei parthenos). This is an easier way to speak of the perpetual virginity of Mary and not get into a biological dispute with those who have difficulty with this teaching of the Catholic Church.

We know in the history of the Church that the Eastern branches had a greater love and devotion to Mary than the Western who came late to focus on Mary in their writings. Many of the Eastern Fathers followed the Proto-gospel of James for their interpretation of the role of Mary and for filling in the gaps found in the Birth Narratives of Matthew and Luke.

A beautiful way of celebrating this Mass would be to take the Mass in the Collection of Masses of the Blessed Virgin Mary entitled The Blessed Virgin Mary, Temple of the Lord. I however followed the suggested daily readings for ordinary time as the ordo for the archdiocese of Cincinnati does. These readings do fit in well with the Marian feast as we see from the Psalm 150 and also from the first reading from Revelation, chapter 4. There the heavenly domain or temple of the Lord is seen in a vision with all of the elders, the angels, and saints there. Later in Revelation in chapter eleven verse nineteen and Revelation chapter twelve we learn that the ark of the covenant leads us to Mary and the Church as the woman clothed with the sun.

We learn from the apocryphal writing the names of Mary’s parents Joachim and Ann who are celebrated on July 26. The feast of the birthday of Mary is also based on this apocryphal writing which is also called A Historical Narrative of the Birth of the Holy Mother of God and Ever-virgin Mary. The writing itself is based on Luke and Matthew’s Infancy Narratives and is a creative historiographical work of Mary’s life up to her giving birth to Jesus in a cave. The work was very popular and has left numerous copies of it for students and theologians.

It is good for us as Catholics to affirm that our knowledge of Mary is based on the authentic canonical scriptures and not on anything in these apocryphal works which later on become a goldmine for the Gnostics who believe salvation is through Gnosis not through the Incarnation and Redemption of Jesus, Son of Mary, become one with us for our spiritual life and eternal salvation.

We certainly wish to focus primarily on Jesus in our Marian celebrations without neglecting the honor due to the Mother of the Redeemer, the Theotokos or God-bearer. True Mariology is always founded upon New Testament Christology. By focusing on ourselves in relationship to Mary as the Temple of the Lord we too are formed by her in the image of her Son. Our vision of the heavenly realm is initiated by what we read in the first reading from Revelation chapter 4. We have a vision of the new Jerusalem based on the historical foundation of the Jerusalem then and now. Mary held Jesus in her womb for nine months just as the Ark of the Covenant held the symbols for the Presence of Adonai (YHWH). Amen.

For a most recent translation of the work called the Proto-Gospel of James see Volume III of Mary of Galilee done by the author of this reflection. There is also a wonderful chapter in Mary: Glimpses of the Mother of Jesus by Beverly Roberts Gaventa, chapter 5, and translation in the Appendix.