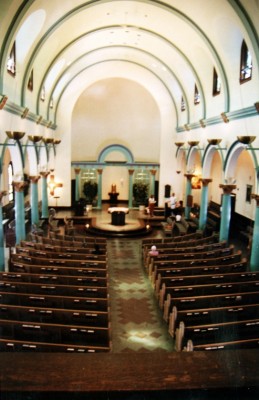 Some of the most wonderful gifts from God come in the form of whispers.

They are the small gifts. The gifts for a particular moment, not to be grasped at, but merely accepted. And if the taker is alert and awake, the heart will swell with gratitude.

On a Sunday not too long ago, I was the fortunate recipient of a bevy of such gifts.

First, a little background. For most of my life, I was a vocalist and songwriter. I enjoyed a career of concertizing which allowed me to travel to many exciting places. I recorded several CDs of original music and sold them online through my website.

The greatest joy as a vocalist was leading the singing at Sunday mass. My parish, St. Luke the Evangelist in Westborough, MA is a blessed community full of active, generous and loving people.

Each Sunday I enjoyed the privilege of choosing the music and leading the congregation in prayer through song. Taught well by caring priests and music directors, I sought to match the songs to the scripture readings, ever mindful that the songs should also be familiar to the people. Having a large catalog of songs in my head, I would even switch out a song for another if a title popped into my head while listening to the homily. The music had to serve the liturgy in the highest capacity. 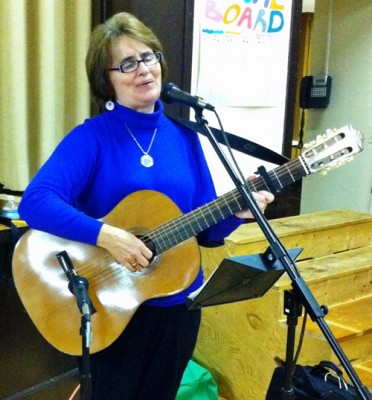 Over the years I had begun to notice a weakness in my voice when the cold weather came, usually starting in September. There was a lack of power and my vibrato was often overly heavy and out of control. In 2010, this problem greatly escalated. The worst part was the randomness of it all for I did not know which “voice” would show up on a Sunday. Would it be the smooth, clear voice that I was accustomed to, or the weak and wobbly voice that made me cringe?

This very randomness shattered my confidence; I was terrified to sing in church. In addition, my throat was tight and sore, making it physically painful to sing.

It had been the physical and sensual nature of singing that I enjoyed so much. The delightful buzz in the head while a beautiful sound flowed effortlessly out of my mouth was now a thing of the past.

A visit to an Ear, Nose and Throat specialist resulted in a diagnosis of acid reflux along with a blood vessel discovered on my right vocal cord. Medication was prescribed but the voice never fully recovered.

Reluctantly in 2010, I resigned my position as cantor at St. Luke’s. In one sense I was relieved at no longer having to worry about singing in front of the congregation, but deep inside I grieved at the loss of this gift from God.

Life went on. I transferred my energies to reading and writing and am enjoying a creative renaissance. I am grateful for the new window God had opened for me.

But every now and then, the grief would return. Attending mass, I found it difficult to sing the hymns. I joined the contemporary choir so I could continue to play guitar and found it hard to contribute vocally. The grief and frustration would engulf me like a wave. Sometimes in the quiet of my bedroom at night, I would cry at the loss.

Over the last two years I have learned to adapt my voice for group singing and have begun to accept that my voice has changed forever. I had to let go of the notion of singing as a pleasurable experience.

I made a conscious decision not to question God’s will, and to be grateful for the new gifts He gave.

A few Sundays ago, I was thrown a curve ball.

Our music director was unexpectedly called away due to a family emergency. She needed coverage at all the masses. She called different members of the music ministry, including me, for help.

I knew I could count on Bruce, the director of the contemporary choir, to sing with me so we agreed to do a couple of the masses. Trying to go along with the flow of God’s will, I had also agreed silently to sing alone if Bruce could not join me. Fortunately that did not come to pass!

And here is where God granted me my bevy of small, splendid gifts.

I asked Bruce if I could plan the music for our mass together. I read the scriptures and chose carefully, prayerfully selecting songs that would match and affirm the theme.

I had no idea which “voice” would show up that morning but was delighted to find that the better voice was there waiting for me. The first gift.

The second gift was Bruce. We complement each other perfectly both in voice and guitar. Approaching music for liturgy with the same mindset, our shared goal is to facilitate prayer in the congregation.

The third gift was yet to come. One of the things I missed most about singing in church was the rare occasion when the music created a silent and sacred space in which the Spirit could be palpably felt. A Moment. I never thought I would ever experience it again.

Bruce and I played a lovely instrumental melody introducing the meditation hymn, “Prayer for Peace” by David Haas. As we sang, I could feel the peace of the Spirit. Nearing the last verse, I signeled to Bruce that we should drop out the guitars and sing acapella. All our voices lingered in the air, slowing fading to silence. Delicious, sweet silence.

Allowing the Holy Spirit to do His work.

Immense gratitude filled my whole being at the privilege, the blessing of being present during this moment.

The gifts did not stop coming. After mass we had a short conversation with Monsignor Mike who expressed his gratitude at our coming forth on such short notice. He then remarked how he had sat in the sacristry before mass to pray as was his custom, and how that prayer was elevated by the music he was listening to as we had been practicing. He noticed how the lyrics fit in so perfectly with what he was preparing to preach to the people.

Listening to Monsignor Mike’s words, I felt a sudden and deep gratitude for a certain priest, Fr. Steve, who had served at our parish in years past. It was his influence and tutelage that elevated my music from song to prayer. His own appreciation of ritual transformed it into art. His love of prayer and scripture was infectious, lifting the celebration of the Eucharist to heavenly heights. At his feet I learned how to choose the proper music and sing it as prayer.

Thank you, Fr. Steve. Thank you, Lord, for Your work though him.

There was one more gift to receive, one that was shared in private.

On the way home I noticed that my throat wasn’t sore. My voice had been smoother, stronger when I sang. Did I dare try to sing something I never thought I could sing again?

Taking a deep breath, I opened my throat and sang “O Holy Night.” This was the piece that for many years, I sang for my family at the yearly Christmas party. The last time I sang it, my voice was weak and wobbly.

Today it was strong, much like it was before acid reflux and shattered confidence.

I thanked God and asked for nothing more. It didn’t matter if the moment never repeated itself. I had received gifts that I would treasure for a life time.