Holiday Giving Customs: a Blessing or a Curse 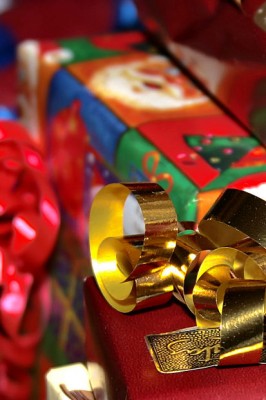 Holiday Giving Customs: a Blessing or a Curse

“Actions speak louder than words.”  “One picture is worth a thousand words.”  “Talk is cheap.”  There are lots of different sayings in the English language that generally express the same thing–words alone don’t do the necessary job of communicating, especially in the case of a personal message.  Like “I love you,” for instance.

So human beings in every culture have developed rituals to express the value they place on people and special events.   Take, for example, Turkey on the dining room table for Thanksgiving or presents under the tree at Christmas.  And then there are birthdays.  Even if all party-goers are tone-deaf and the birthday boy or girl is on the Atkins diet, we must sing the silly song and blow out the candles on that carb-laden cake!

The problem with human beings is that we have a stubborn tendency to allow rituals to become merely mechanical actions, forgetting their real meaning (one of the effects of original sin).  The Puritan response to this regrettable tendency was to abolish as many rituals and traditions as possible.  In the originally Puritan state of Massachusetts, for example, Christmas was not an official holiday until the 1890's!

The Catholic approach has always been different.  We accept the celebrations with their occasional excesses and their traditional trappings (even those of pagan origins such as the Christmas tree).  The goal is to revive the original meaning of the rituals or invest them with a new, Christian meaning.  In the pagan Roman world of the fourth century AD, everyone felt relief as the days once again started getting longer following the depressing darkness of the winter solstice.  So they observed Dec 25 as “the birthday of the unconquerable Sun.”  “What a great time to celebrate the birthday of the truly unconquerable Son!” thought the early Christians.  So they successfully co-opted the day.  Christmas was born.

So what do we make of the current gift-giving extravaganza of Christmas in America?  First let’s talk about Christmas morning.  It’s Jesus’ birthday, but the piles of presents under the tree are the real focus, especially for the kids.  The first present is opened and then another and another, faster and faster.  It resembles a school of sharks going into a feeding frenzy.  Almost instantly the thrill is gone and the room is filled with crumpled wrapping paper (but it took so long to wrap them all!).

My wife and I did not want to be like the Grinch and call it all off.  So when we started our family, we established some rules.  On Christmas morning, before we go to the tree, we gather at the manger, sing a carol together, read a short scripture passage, and thank God for Jesus, the greatest gift of all.  Then we open one gift per person at a time, with everyone paying attention to what others get (this is hard!).  St. Paul says “rejoice with those who rejoice and weep with those that weep.”  Hopefully we do more of the former than the latter.

We further restrain the feeding frenzy by recourse to the 12 days of Christmas.  We don’t open everything on the 25th.  Rather, we leave some presents wrapped and under the tree for the other 11 days (this takes a bit of discipline!).  That way, everyone can savor each present, have something to look forward to, and prolong the feast.  We get more prayers, readings and carols around the manger that way, too.  Of course, we don’t have enough presents for each person each of the 12 days, but we’re okay with that.

This D’Ambrosio tradition has generally worked well over the last 19 years, with a few occasional bugs to work out, of course.  Like the time grandma called long distance one Christmas night and asks her little darling how he enjoyed her gift.  When the darling responded back “what gift?” there were a few red faces.  Now we make sure grandparents presents get opened first!

Dr. Marcellino D’Ambrosio writes from Texas.  For his resources on parenting and family life or info on his pilgrimages to Rome and the Holy Land, visit www.crossroadsinitiative.com or call 1.800.803.0118.