Role Play Your Way Through Christmas with Hands-on Nativity Sets

Role Play Your Way Through Christmas with Hands-on Nativity Sets

It’s so easy to get caught up in the commercialization of Christmas. Kids obsess over toys. Shopping deals bombard your inbox with “can’t miss” deals. It takes a conscious effort to stay focused on Jesus during Advent and Christmas.

Having a nativity set displayed in your home is a great way to keep Christ at the center of your family’s Christmas celebrations. The only problem is, if you have small children, you may worry about them damaging your nice set.

Here’s a twist on the traditional nativity set when your kids are young--get one they can play with.

My wife always wanted the full blown Fontanini setup with the village and tons of pieces. However, we wanted our kids to interact with it too. It’s one thing to say you won’t be nervous if your kids handle the expensive figurines, but you know it will come through on some level. 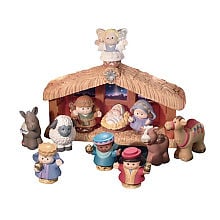 So, we went exactly the opposite direction...we got a Fisher-Price Little People Nativity Set. It had all the major players: Mary, Joseph, Baby Jesus, the Wise Men...there were even animals. And, it avoided the mixed message of, “Pay attention to the set, but really don’t touch it.” It was all for them.

You might be thinking this will look silly under your tree. But there are definite advantages to having a nativity like this. The kids can be completely hands-on, and that’s a good thing. The purpose of a nativity set is to be a reminder of the Christmas story. Nativities can be incredible learning tools for kids. Every minute handling the set and acting out the story is another minute the truth of Christmas is burned into their brains.

We started out by playing with them and teaching them the story. Then, we just let them go with it. In no time they picked it up and even got a quite creative. One time I found Mary driving the dump truck, but that was okay. As they got older, the details evened out. 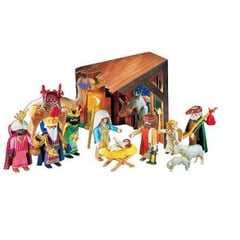 After a few years, we graduated to Playmobil. Here’s where the fun began. The Playmobil nativity is very detailed. In typical Playmobil style, there are tons of little accessories that embellish the play. Our kids were fascinated with all the pieces and played with them for hours. And that’s what we wanted.

One of the great things about Playmobil is all their other themes are interchangeable. We robbed cows, roosters, mice, hay, farming equipment, and other “biblical looking” people from our Noah’s Ark set. Playmobil Romans made it into the nativity scene as well. Soon we were able to build a huge nativity landscape with a Bethlehem village, a palace that included King Herod and his court, and a Roman fortress complete with centurions and a squad of soldiers. I have boys, so the element of danger and sword fighting was definitely incentive.

Every Christmas the story progressed something like this. Baby Jesus hung out somewhere over the scene in heaven waiting with the angel Gabriel for Christmas morning. The Wise Men began their trek from the far area of the living room the day after Christmas. They made their way to Herod’s palace first and eventually into Bethlehem where they greeted baby Jesus on Epiphany. Then, they hightailed it out of there before the Romans caught up with them. Sometimes the Romans descended on Bethlehem in a fury for the Massacre of the Innocents if the boys are feeling particularly gory that year.

So, if your kids are young and you want to set up a nativity, consider buying a set they can play with. Not only does it keep the true meaning of Christmas alive in your home during the holiday season, it makes the Christmas story fun because it’s interactive and engages their creativity and imagination.

It’s also an excellent way for your kids to learn and remember the Christmas story. And besides all that, it’s just fun. Dads like it too!

2016 Nativity Scene Linkup: Our Celebration of the Creche
Read
10 Tips for Bringing Hope to Your Life
Read
I Played My Best for Him
Read