How Can We Protect the Holy Innocents of Our Time? 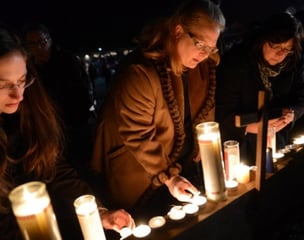 How Can We Protect the Holy Innocents of Our Time?

As we enjoy our songs of hope and peace this Christmas, we raise our voices with bittersweet emotion. The nation is in mourning for the innocent children who lost their lives at Sandy Hook Elementary School in Connecticut, and we are poignantly aware of a deep longing for peace—peace at home and abroad, in our hearts, homes and schools. Where has this violence come from? How can a country so richly blessed be plagued with such senseless violence?

As Christians and as Catholics, we must reach deep into the heart of our own tradition and challenge ourselves to find some way forward that will move us all in the direction of peace.  In the holy gospels, we read that when the Savior came into this world, He himself was targeted for a massacre: “When Herod saw that he had been tricked by the wise men, he was infuriated, and he sent and killed all the children in and around Bethlehem who were two years and under… then was fulfilled what had been spoken through the prophet, Jeremiah: A voice was heard in Ramah, wailing and loud lamentation, Rachel weeping for her children; she refused to be consoled, because they are no more.”  (Matthew 2:16-18)

Why didn’t God protect the Holy Innocents of Bethlehem? He sent an angel to warn Joseph. Why didn’t God warn them? And couldn’t God have protected the innocents of Sandy Hook? The truth is that God rarely intervenes in human affairs. However, the Lord does work in individuals and communities whose hearts are open to grace and ready to make a change that is called for. Joseph was open. He could hear the angel and make the changes God asked of him: to leave his country, fleeing in the night to become a refugee with no knowledge of what might await him and his family in a strange land. But Herod’s heart was closed in an impenetrable darkness. Even if God had sent an army of angels he would never have taken notice. And because he had political power, he could inflict his darkness on others. So too, the young man who became a killer in Connecticut acted out of darkness. Instead of political power, he used firepower. In these two events in human history we see the Cross of Christ: that God can bring resurrection out of unspeakable evil done by human beings. And we also see that God desires to upset the powers of this world that perpetuate such evils, to struggle against them so they may not continue on. Only God can work this mystery of the Cross and bring resurrection out of human evil. However, human beings have the power to work to mitigate against the continuance of the powers of this world that perpetuate such evils.

What about our hearts? Are we open to allowing God to work through us to bring peace on earth? What keeps us from working for a better country, one where violence is not considered a form of entertainment; one where the existence of 300 million guns among us is finally deemed too much; a society in which mental health problems are diagnosed and treated immediately, for the well being of all?  I believe that women and mothers have a key role to play in accomplishing these things, for women and children suffer the most from war and violence in society.

This Christmas season, when we honor as saints the Holy Innocents feast day on December 28, let us also honor the holy innocents of Sandy Hook and the adults who gave their lives trying to protect them, honoring the teaching profession in ways never imagined. In their memory, let us do all we can to be open to grace and to take action for peace:  to find non-violent entertainment, to vastly reduce the number of guns in society and to let no one suffering from mental illness go untreated. Surely things will get better, and we will have honored the memory of those who have fallen, and their families.