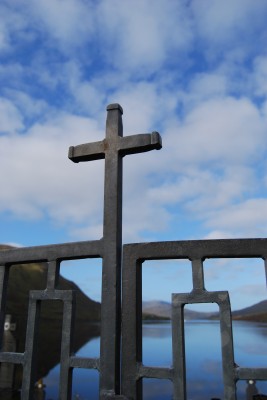 John the Baptist gives his full expression of faith in the person of Jesus whom he proclaims and prophesies as the Lamb of God who takes away the sin of the world (turning away from God).  In the Jewish background the Lamb is most likely the image used by John the Baptist to speak of the Passover Lamb.  The word “Behold” is a prophetic announcement in John’s Gospel whenever a holy person points to someone or some event in the Fourth Gospel.

The Baptist is actually seeing Jesus coming toward him for the first time in this Gospel.  He realizes that the one who is to come has now arrived. Though we do not have a scene in which the Baptist actually baptizes Jesus there is a reference that is typically symbolical in this Gospel where we hear this from John, “I saw the Spirit descend like a dove from the sky and it came to rest on him.” He also says that it is “He who will baptize with the Holy Spirit.”  This is the power of God that Jesus will display in his ministry in the days to come as he brings the baptism in the Holy Spirit by his preaching, healing, and proclaiming the kingdom of God has come.  For John the Baptist, Jesus is God’s chosen one.

John’s humility is striking because it is so authentic and shows us a man who fully knows himself and his role in the history of salvation.  There is nothing pretentious or false about the Baptist.  He states his unworthiness several times in the New Testament and affirms that it is Jesus who will baptize with the power of God, the Holy Spirit.

Among the Evangelists, John is known as the “theologian”.  It is he who goes beyond the Synoptics in his Christology.  Origen, one of the greatest minds of the third century tells us, “We might dare say, then, that the Gospels are the first fruits of all Scriptures, but that the first fruits of the Gospels is that according to John whose meaning no one can understand who has not leaned on Jesus’ breast nor received Mary from Jesus to be his motheralso.”

The Fourth Evangelist speaks clearly of Jesus divinity and humanity.  He narrates how John the Baptist becomes aware and prophesies that Jesus is the Chosen One, the Son of God.  It is the Baptist who always points to Jesus as the Messiah once he has seen and experienced his presence.   Fr. George McRae, an expert on the Gospel of John says, “The Baptist focuses our attention on Jesus himself, and that is the Baptist’s real function.”  We, too, are to enter into the compelling call of the Fourth Gospel to have such faith in Jesus that we experience who he is in our lives.  We are led to see him the child born of Mary, in the growing young man in the Temple, and then in the great year or two of his mission of doing the Father’s will.

The Gospel of John is called a “krisis” or decision-making Gospel to believe wholeheartedly in the person of Jesus, the Word of God who came among us as a human person who witnesses to the truth, the life, the light.  He is also the way to the Father.  Our daily decisions to embrace the living Jesus and experience him in our lives is what helps us to live life fully and to witness to Jesus as John the Baptist did.  Amen.