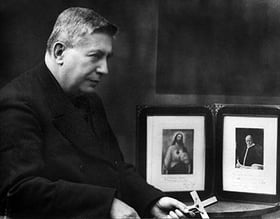 At times, an ardent Catholic is tempted to think that ignorance really is bliss and knowledge can be downright depressing. We know too much to be politically correct and go along with what is actually sin.  But how can we, in our smallness, set the world on fire with the light of Christ?

It often feels that we are perceived as a Catholic nut job. Yet, all we want is to do is follow Christ and spread his message.  We are no more extreme than the first apostles; at least that is the extremism for which we should be reaching. Sometimes, however, it’s hard and feels so lonely.

Firebrand for Our Times

Beginning in 1907, he traveled the world for forty years, imploring families to invite Jesus into their homes and serve under his kingship. Although Father Mateo had been invited to preach in the United States as early as 1918, he did not finally come until 1940. He had heard so many bad things about our country’s lack of spirituality; perhaps he put off what he imagined to be a formidable task of conversion.  Instead, he became smitten with Americans and stayed for several years, preaching missions and retreats throughout the country.

Here is an excerpt from the now out-of-print biography of Fr. Mateo Firebrand by Marcel Bocouet, SS.CC.  It is taken from a retreat he preached to the Columban Fathers in Nebraska on May 24-30, 1942. His words are still salve to our spiritual wounds and ammunition for the battle.

I have been astounded by the great qualities of the people of the United States. You have here rich, rich material. In this dark hour your people can help the Church powerfully.  How? With sanctity!”

But he had no illusions concerning the dangers that menace Christian living in America.

Perhaps the devil realizes that you are likely to have a great future. Maybe that is why there is such a terrific attack against the home—an attack on marriage and on the natural laws; a fight to eliminate Christ and His influence in the home. What is the bombing of cities compared with the awful destruction of the home? There are worse disasters than those of war.

Then think of the ravages wrought by neutral education—neutral in regard to God. Imagine a child being neutral towards his mother! And yet, in spite of all these evils, you have wonderful gifts. The Lord Jesus seems to be preparing you for a great mission.

How will this, or any other mission be fulfilled? Listen to the answer of a veteran of many apostolic fields:  With utter disillusionment in everything else, I believe in no method that is not, first of all, sanctity and the Mass.

And what is sanctity?  To be on fire with love. And what makes the lover?  The knowledge that God loves him.  He has first loved us.  From this realization comes confidence, the trust of a child in a loving merciful Father. The next step is a return of love for love. This is the doctrine that opened the furrows for the seed of Christianity in the pagan world twenty centuries ago.  This is the great Gospel understood by the little ones and by the learned. And this Gospel is summed up in the adorable symbol of divine Love Incarnate, the Sacred Heart of Jesus Christ.

One of the Columban Fathers jotted down some of Father Mateo’s striking affirmations:

There is pretext for discouragement, but no reason for it.  We can become saints in the simple accomplishment of daily life, in the beaten track, the simple path of Nazareth, without adding anything but the great sense of faith and the flame of charity.  Look at Mary in Nazareth--no halo, no pedestal, no miracle. Yet she is the Queen of Heaven.

A saint is always a penitent. The daily inconvenience of life:  there is the great penance, to be borne without grumbling. Grumbling makes us suffer three times and without merit.

If we gave Jesus one hundredth part of what soldiers give for their country, we would be saints.

A young man who is afraid to strive for sanctity should not be accepted for the seminary.

The saviors of mankind have always been saints. Dominic and Francis have done more for mankind than 50,000 politicians.

Austerity with pride can be found anywhere.  The great moral austerity of humility is rarely found.

When you have no wings of prayer to go against the law of gravity, you fall down.

Father Mateo preached that through the enthronement of the Sacred Heart as King of the home, families are preserved and sanctified. Jesus promised St. Margaret Mary: “I will establish peace in their homes.” Love and devotion to the Sacred Heart of Jesus strengthens families under the kingship of Christ.

By enthroning our homes to the Sacred Heart we honor Jesus and Mary daily as the King and Queen of our homes. Father Mateo's idea was that by entering a picture or a statue of the Sacred Heart into homes, each household member would be permeated with the love of Christ and would show it by a truly Christian family life. Extending his message further, Father Mateo asked families to commit to be nighttime honor guards for Jesus, King of their homes. Beginning in 1907, he traveled all over the world for forty years, imploring families not to welcome Jesus into their homes, put him in a place of honor and keep him company.