Our Lord Uses the Lowly to Reveal His Strength 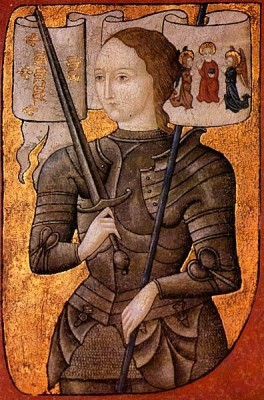 Mark Twain wrote an out-of-character-for-him historical fiction book about the heroine who inspired his dreams. In fact, he went to France to study the 15th century trial manuscripts about Joan of Arc.  His fictionalized biography is based on detailed records of a trial that questioned the 19-year-old about her entire life. So we have a detailed record of a girl who rallied the courage of the French people and in 13 short months she nearly ended the Hundred Year War.

Feminists hold up the image of Joan as a primary example that men and woman are the same and should do the same things. But our faith as Christians teaches us something totally different when we look at St. Joan. In fact, the season of Christmas teaches us that truth and freedom are much different than the rights-demanding mindset of the modern world.

Joan of Arc, was a beautiful girl who cried at the sight of blood.  Like many examples given to us in the Bible, Joan was the exact opposite of what anyone would expect from the Commander-in-Chief of the entire French army.  God picks the heroes in times when big change is required and He shows His presence by tapping the shoulder of the unlikely.

Imagine the disbelief of everyone when a 17-year-old, illiterate shepherd girl from a small village in France said that God has sent her to lead the army and re-claim her country from English domination?! It was outrageous.  The shock was not only because she was a girl. But she was a child with no experience or knowledge. She had never even ridden a horse. She didn’t know the geography of the land, let alone military strategy.

But the same sequence of events has been true before. Nomadic tribes tormented Israel for seven years until God appointed a young leader named Gideon. Gideon describes  himself as the poorest and most insignificant person.”Please , my Lord, how can I be the one to save Israel?” he says. (Judges 6: 15).  Afraid of his own community Gideon pulls down their altar to Baal during the night, and his father defends his action. Then, after witnessing God’s miracles, Gideon grows in confidence. But God tells him he has gathered too many soldiers for the battle ahead. The numbers are whittled down from several thousand to a mere 300 even though the enemy is “as thick as locusts.” Thus God uses a poor boy and a small band of soldiers to show His mercy and love for the people. (Judges 7:1-22)

David was another youth who became a hero. The youngest son of Jesse, he too was a mere shepherd boy. Yet he was the one God strengthened to do battle against the feared giant, Goliath and lead the battles of Israel against all their enemies.  (1Sam. 17:41)

And contrary to popular belief, not all Old Testament heroes are male. Judith was a descendant of Gideon. She was a widow who had fasted for three years before she prayed, “Make every nation know clearly that you are God, the God of all power and might.” (Judith 9:14) She cuts off the head of the enemy king and instructs the people on how they will have victory.

Throughout the Old Testament we hear story after story about how God uses the weak and the insignificant in order to display His love for humanity.  Then in the most spectacular example of all, God Himself comes to earth—not in power and glory as we might expect—but as a baby born in the cold, lowliness of a barnyard stable. Power is turned upside down. Rights are not asserted. Demands for change are not made. Instead, we have the grand witness of love. We see the truth that love will be persecuted. God’s Victory transcends this world and lives forever.

God reveals Himself in the most unexpected of ways.

And so we return to Joan of Arc. Her story is a surprise. In no way does she demand anything for herself. Words of saints and heavenly messengers have come to her. And she does as she is told out of love.  She is obedient, humble and persevering. She is faithful, earnest and compassionate. In these very qualities she inspires… and suddenly an entire country is transformed.  The story of Joan is a story of God, working through good servants who become Great.

The work ahead in transforming our fallen culture is not easy. Our modern world is filled with paganism—abortion, perversion, attacks on family and Christianity, attacks on religious freedom. There are battles to be fought. And the example we have to follow during the Christmas season is the martyrdom of St. Stephen, who looked to heaven as he was being stoned to death. Joan died in that same posture. The battle of faith leads to the wonder of the Cross.

St. Joan of Arc pray for us.