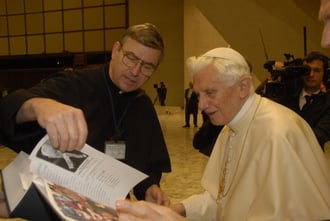 EASTON, Mass. – A book with more than 80,000 pledges from people promising to pray the Rosary daily was presented to Pope Benedict XVI in Rome by Father John Phalen, CSC, President of Holy Cross Family Ministries. The book was given to the Pontiff at the Vatican in December as part of the Year of Faith observation and the 70th anniversary of Family Rosary, which was founded by Servant of God Father Patrick Peyton, CSC, also known as the “Rosary Priest.”

“It was a special opportunity to give this book to Pope Benedict XVI,” said Father Phalen. “It’s filled with the names of people from around the world pledging to pray the Rosary every day. There are even pledges in languages we can’t understand, like some of those from India and Bangladesh. It was an honor to present His Holiness with the book and ask his Apostolic blessing on our ministry.”

The pledges were collected from people who requested free Rosaries through a special program offered by Family Rosary, a member ministry of Holy Cross Family Ministries, which presently employs 30 Holy Cross religious and approximately 125 laypeople around the world. They agreed to pray the Rosary daily, many with their families, as part of a campaign started by Father Peyton in 1991. Back then, the plan was to send 1 million Rosaries to Russia. It has since evolved into a worldwide effort to send prayer beads to families, schools, parishes and individuals on every continent. So far, more than 20 million Rosaries have been given away.  About five million of those were provided by volunteer Rosary-making groups in parishes.

Family Rosary was started by Father Peyton (1909-92) in 1942 to support the spiritual well-being of the family through prayer, especially the Rosary. He dedicated his life’s mission to the Blessed Virgin Mary and began encouraging people to pray the Rosary around the world. Aided by more than 50 fellow Holy Cross religious over the years, Father Peyton became one of the most influential American priests of the 20th century and was a media pioneer because of his evangelization through radio, movies, television and billboards. He is now a candidate for sainthood. 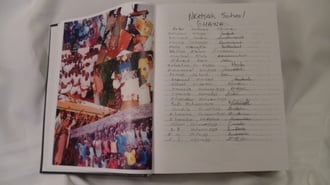 Page of prayer pledges submitted by individuals and families from Ghana, Africa, which his part of a book of 80,000 people pledging to pray the Rosary daily that was presented to Pope Benedict XVI by the President of Holy Cross Family Ministries, Father John Phalen, CSC.

The pledge book was presented to Pope Benedict XVI during an International Congress in Rome. The people in the book were asked to pray for peace, which is what the Blessed Mother asks for, and to post a pledge card in their homes as a reminder of their commitment – just as Father Peyton had asked millions of faithful to do before them.

On January 9, Father Patrick Peyton’s birthday, the ministry honors him with a memorial Mass and also by continuing to share his inspiring story to encourage families to pray together every day.  They work to help families understand that simply because Patrick’s father gathered his family to pray every evening, the love of family Rosary prayer was instilled in Patrick and he went on to found this worldwide ministry now serving families from offices in 17 countries.  For two decades now Rosaries have been provided to those who requested them from whatever country.  The ministry is supported by free-will donations.

In the spirit of its founder, Servant of God Father Patrick Peyton, CSC, Holy Cross Family Ministries encourages family prayer, especially the Rosary, to support the spiritual well-being of the family. For more information, call 800-299-7729 or visit www.FamilyRosary.org.