Perfectly timed to coincide with the release of The Hobbit movie, the new book Bilbo's Journey: Discovering the Hidden Meaning in The Hobbit by Joseph Pearce is a perfect read this winter. Here's a recent article about the book: 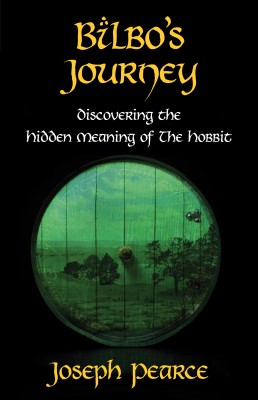 Bilbo's Journey: Discovering the Hidden Meaning of The Hobbit

ST. CLAIR SHORES, Mich., Dec. 11, 2012 /Christian Newswire/ -- "If I speak at a college about unlocking the Gospel, fifteen people will show up," said Joseph Pearce, author of the new book, Bilbo's Journey: Discovering the Hidden Meaning of The Hobbit. "But if I speak about unlocking the 'Lord of the Rings,' 300 show up." And so, the English-born Tolkien scholar and writer of fifteen books begins with dragons, dwarves, and elves, as he unlocks the deeper meaning behind J.R.R. Tolkien's classic novel The Hobbit.

Pearce's book, published by St. Benedict Press/Tan Books, coincides with the anticipated release of Peter Jackson's prequel movie, The Hobbit: An Unexpected Journey opening in theaters December 14. Tolkien's Lord of the Rings trilogy and The Hobbit are essentially a fantasy story of humanity as seen through a Catholic lens. "People put their guard up against Christianity," said Pearce, "but these books get beyond that. Everyone who reads them will be more disposed to Christianity."

In Bilbo's Journey, Pearce intertwines Tolkien's classic tale with an explanation of the profound Christian meaning behind it. Without uncovering the rich imagery, much of the story's deeper meaning is lost to many. For instance, Pearce explains that providence and grace are presented as luck but at the end of Bilbo's quest, Gandolf asks him, "You don't really suppose, do you, that all your adventures and escapes were managed by mere luck?"

Pearce states that Bilbo Baggins represents us all. "He shows us how to grow in virtue and courage and become who we are meant to be," he said. "It is the Christian journey of self-sacrifice out of love for others, and abandonment to providence and grace."

At the beginning of The Hobbit, Bilbo is too attached to his possessions. He is a creature of comfort addicted to the creature comforts. Though he finds it difficult to leave his home and possessions behind, his journey allows him to discover the greater meaning and purpose of life. According to Pearce, "The Hobbit illustrates the priceless truth that we only become wise men (homo sapiens) when we realize that we are pilgrims with a purpose."

Overcoming vices and evil, or "dragons," in The Hobbit is not just the result of outward actions but the inner changes that have occurred. Bilbo's Journey gives readers the opportunity not just to better enjoy the movie, but also to apply its lessons to their lives as Christians.

I'm happy to share the following excerpt from Bilbo's Journey:

“In truth, Bilbo Baggins bears a remarkable resemblance to each of us, his diminutive size and furry feet notwithstanding. He is a gentleman, much like Tolkien and his readers, who seeks the respectable life of bourgeois gentility. Indeed, we are told on the very first page that Bilbo “was a very well-to-do hobbit” and that he came from a very respectable family: “people considered [the Bagginses] very respectable, not only because most of them were rich, but also because they never had any adventures or did anything unexpected”. Bilbo likes tea and toast, and jam and pickles; he has wardrobes full of clothes and lots of pantries full of food; he likes the view from his own window and has no desire to see the view from distant windows, let alone the view from distant mountains and valleys. He is a creature of comfort dedicated to the creature comforts. Nothing could be further from Bilbo Baggins’ mind, or further from his desire, than the prospect, or the threat, of an adventure. In Christian terms, Bilbo Baggins is dedicated to the easy life and would find the prospect of taking up his cross and following the heroic path of self-sacrifice utterly anathema. The unexpected party at the beginning of the story, in which the daily habits of the hobbit are disrupted by the arrival of unwelcome guests is, therefore, a necessary disruption. It is the intervention into his cozy life of an element of inconvenience or suffering which serves as a wake-up call and a call to action. Gandalf introduces the reluctant Bilbo to Thorin Oakenshield and the other dwarves in order to prompt him into an adventure, the purpose of which is ostensibly the recovery of the dwarves’ treasure but also, on the moral level at which the story works, the growth in wisdom and virtue, through suffering and sacrifice, of Bilbo himself. In losing his bourgeois respectability, the price he must pay for becoming an adventurer and “burglar”, he forsakes the world and the worldly in favor of the pearl of great price.”

Order Bilbo’s Journey: Discovering the Hidden meaning of The Hobbit and support CatholicMom.com with your purchase