Back to Basics: Refocusing on little acts of love and respect

“Well done, good and faithful servant: you have been faithful over a little. I will set you over much.” (Matthew 25:21) 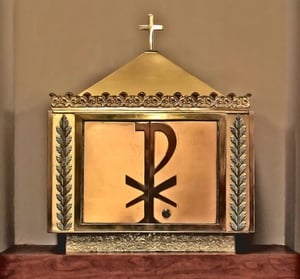 Back to Basics: Refocusing on little acts of love and respect

Rather than beginning the New Year with big resolutions, I plan to refocus on those little actions I can remind my daughters about in our spiritual lives. My thoughts to practice these almost unnoticeable gestures of love and respect began while attending weekly Mass held for my child’s elementary school.

During the homily, the Monsignor told the children he noticed many weren’t genuflecting properly. In an almost comical, exaggerated way to make his point, he nearly stumbled and faced toward the pews as he demonstrated the incorrect way to genuflect. This, he gently but firmly told the students, wasn’t a genuflection that showed love and respect to God.

Monsignor continued by asking the students where the living presence of Jesus Christ was located in church. Many children pointed eagerly to the altar. Monsignor shook his “no,” and pointed to the red light, right of the altar near the Eucharistic Adoration Chapel where the tabernacle is kept. I shifted uncomfortably in my own seat, not even noticing the red light before then, and recalling that I usually genuflected toward the altar myself. The students were especially attentive when Monsignor demonstrated how to correctly genuflect.

At another Mass, Monsignor instructed a boy to take off his cap. He taught everyone that wearing a hat during Mass wasn’t showing love and respect to God. Removing your hat before entering church and genuflecting properly before going into your pew are among those little acts that seem small but do matter. In our family, as another example, we taught our daughters to firmly shake hands with others during the “sign of peace,” and whenever they meet new people. Again, a strong handshake may seem insignificant but the gesture can reveal strength of character – and does wonders in making a good first impression.

I have reflected lately that if I can instill in my children about the importance of little acts, they may become more loving and respectful in and out of church. They also may grow more confident and drawn to larger spiritual practices that require more discipline, such as making a Holy Hour and saying a daily Rosary.

But for now, we’ll start with practicing little acts such as:

Clothing: Teaching my children to dress for church in a way that shows respect and love for God isn’t always easy, but they usually understand my expectations for church. I started with easy guidelines, such as no shorts and no sleeveless tops. When we visit our Lord in church, we can make sure we always appear well-groomed and modest.

Holy Water: When my girls were younger, they loved dipping their fingers in the holy water as we entered the church. Now they most likely take these dishes, found at the front door of Catholic churches, filled with Holy Water for granted. I will remind my daughters that placing their fingertips in the water and making the Sign of the Cross helps to get them ready for Mass, to be prepared to visit with God.

As Catholics, we are taught that the Mass is one large prayer, and it contains many short prayers. While the Mass is the important prayer of all, it’s the little prayers that make up this big celebration. I am looking forward to teaching my daughters during this New Year that little acts done with love and respect do matter!