At the Base of a Tree 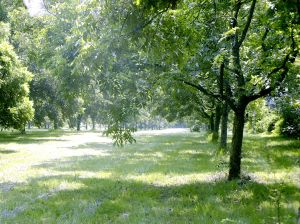 At the Base of the Tree

The first major cold front finally blew into our area.   It offered us relief from unseasonably warm temperatures that followed our seasonably hot summer.    Along with a welcome change in weather, Autumn has brought back memories of that season on our small farm in Louisiana.

The pecan harvest fell to women and children on our farm.   My father commuted thirty miles to the university where he taught and when he was home, any work he did was related to the cattle.   I would pick pecans after school, but for me, the real work —and the real memories—belonged to Saturdays.   On those mornings, I woke early and dressed in my warmest, oldest clothes.    Blue jeans that could take wet, grass stained knees and a too-large coat--previously the property of my parents or older sister-- were basics in my pecan picking- ensemble.     A quick breakfast and then I headed outdoors, grabbed a bucket and prepared to hit my knees.

When I tell people about picking up pecans,   they sometimes share their own stories of spreading sheets on the ground and shaking trees to capture the nuts in their linen traps or of using long-handled, curved-spring devices to gather small numbers of pecans.   Our method was a little different and my adult mind can appreciate the lessons I learned at the bases of those majestic trees which canopied my childhood.

1. Just start at the beginning.    Mama usually picked pecans all week with her friend, Carmel.   Mrs. Carmel had six children, so on any given Saturday, you could find as many as nine people picking pecans on our farm.    The method was simple.   We lined up, at the base of the tree, with about two feet between each person.   Then, we dropped to our knees and began to search for pecans amidst the grass and leaves.   We picked in circles around the tree.

2. Make your own way while leaving a path to guide the way for others.   As we circled the tree, we would rake the leaves out of our way, leaving neat piles that formed concentric circles.   As the day progressed, those leaf circles made an extremely satisfying sight.    The leaves left a clear mark for the person beside you so that he could keep his path and know exactly how far to look for pecans in either direction.   Not only was I responsible for picking my area, but my work affected the path of the people on either side.    Only if we all kept to our path were we insured the ground beneath the tree had been cleanly picked.

3. Patience and deliberate action will eventually lead to harvest and bounty.   As we made our way around the tree in ordered fashion, we eyed little piles of pecanswaiting to be gathered with no work needed to discover them.   After we had scavenged for single pecans scattered under leaves, the  discovery of those beautiful piles was always a little bit of pleasure in our day.    Our usual method of pushing leaves aside had to be altered when we picked pecans in our pastures, instead of the yard.    Our cattle were grass fed, which meant we planted ryegrass for the winter months.   Ryegrass is extremely delicate, so we had to gingerly feel for and lift pecans from their tangled snare so the grass for which we had paid and labored to plant would not be ripped from its roots.

At dusk on Saturday afternoon, we would drive thirty miles to sell our pecans at a fruit market.   There were two markets and we called to find out which one was offering the best price per pound.   Then, we poured all our pecans into sturdy burlap sacks which still smelled of cottonseed meal for our cattle’s vitamin/mineral mix.   Mrs. Carmel and Mama used that money for Christmas presents, so we reaped a concrete  reward on Christmas morning.   It always made Mama proud that she never touched money in the bank accounts to pay for Christmas presents, decorations, and foods.

I always enjoyed being included in adult conversation.   It seemed to occur so naturally as we were joined in solidarity on our knees beneath the pecan trees.   I also learned so much about my mother and what it meant to be a woman from the conversations between her and Mrs. Carmel.   In addition to group picking, I was also required to pick up a half-gallon ice cream bucket of pecans after school.   That solitary time spent with my hands focused on a repetitive task gave me a chance to allow my mind to ponder and my imagination to wander.    The idea of seasons in my life was clear to me at an early age due to my life on the farm.   Over the year, I watched the cycle of the trees.   Bare grey, winter branches gave way to green leaves and tiny buds in the spring.   Over the summer, those buds would develop into bright green hull-encased nuts.   Finally, fall brought the browning of the hulls, as the pecans became visible and eventually fell to the ground.    As I grew older, God’s hand in the seasons of my own life became more real as I compared the cycle of nature with that of my faith.   In the silence of those fall afternoons created by God, I became comfortable with silence.    That silence would foster my longings for Him and His voice as I grew older.

Pecan picking was not a task I looked forward to --or appreciated --at the time.   Such is usually the case in our lives!   Looking back, memories of cool breezes, hot chocolate breaks, and the smell of bean suppers simmering on the stove take pride of place over annoyance at my time not being my own and my Saturday being filled with work instead of play.   Time tends to do that.   Mama never sat down and consciously planned pecan- picking as a formative activity for me.   It was an organic activity of our farm life.   As mothers, we provide opportunities for life lessons without even realizing it.   Everything doesn’t have to be planned and picture-worthy.    Simple truths can be learned in the most simple of tasks.  As a child, my heart and mind were being prepared for God while circling the base of a pecan tree on my knees.    Later, I would hear the voice of God as I knelt at the base of a reminder of the tree of our salvation: the crucifix.

May I approach the mundane and simple with a heart open to You and Your voice.   May I take the extra time to involve my children in household tasks.   May I be an example to them of approaching work with a grateful heart.   May we experience Your presence in the glories of Your creation and in simple silence.    May we always remember that we join our motherly tasks with those of Holy Mother Church to teach our children about God and help them to listen for His voice in their lives.   Amen.