If you live long enough, you'll see just about everything.

Today I saw something that none of my most recent ancestors saw - the resignation of a Pope.

I think most of us remember the end of John Paul II's pontificate and the images of the once active pope bowing to the ravages of old age and illness. It was hard to watch but at the same time taught a lesson in its own right - that life is precious even to the very end, and that God can indeed use our lives regardless of our age and physical condition and that all of it is truly a gift if we choose to see it that way.

But now Pope Benedict XVI is teaching us another lesson. The Holy Father's decision to resign has as much dignity and courage as the decision of all of his predecessors to die in office. I think the lesson is that sometimes we have to recognize our own limitations and weaknesses, and step aside for the good of others and also for our the sanctification of our own souls.

It seems that Pope Benedict has looked to another Pope for inspiration and guidance - Pope Celestine V (1215-1296). Pietro Angelerio was born into a very simple and poor family. After his ordination as a Benedictine priest, he retired to the wilderness of Morrone and lived the life of a hermit inspired by the example of John the Baptist. Pietro lived simply and worked hard. He followed four Lents a year and only allowed himself to indulge his diet on Sundays. His days were filled with prayer, reading and study. Much like the original Saint Benedict- Pietro's lifestyle attracted men seeking a life of holiness and he eventually had many monks and monastaries under him. But when governance of this new order (approved by Pope Urban IV) started taking over his daily life, Pietro turned leadership over to another, and returned to his life of seclusion, austerity and prayer. He had no desire to lead.

Pietro's election to the Papacy was rather comedic. Pope Nicholas IV had been dead for two years and the cardinals were no nearer to electing a new pope. Pietro sent a letter to the Cardinals chastizing them for the long delay in electing a pope. This got their attention and the story goes that Cardinal Latino Orinsi reported that God had told him to elect a pious hermit to the papacy and Pietro Angelerio was elected! Of course they had to ascend a distant high mountain to tell him the news and the old hermit met the news with tears and denial! But he eventually descended the mountain top and became Celestine V. 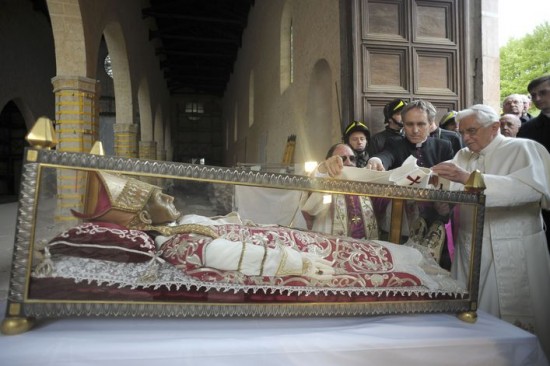 But holiness and humility does not a good leader make, and Celestine became the pawn of many during his short pontificate. Realizing that at age 86 and with no experience in church politics Celestine decreed that the Pope COULD resign, and then he promptly did so!

Is Pope Benedict following the example of this holy hermit pope? Perhaps. In 2009 he stopped off to visit his tomb and leave his pallium. Then a year or so later he visited Pope Celestine's relics in Sulmona to pray.

Surely Pope Benedict had this simple Pope, who was 86 at the time of his resignation, in mind today as he tendered his own resignation. And I think much like Celestine who humbly recognized his limitations, Benedict has come to terms with his own and accepted them.

There are a lot of questions (a pope hasn't resigned in over 600 years!) but I think Catholics can be assured that the Holy Spirit is still guiding the church, and that at least a new pope will have the guidance and wisdom of his predecessor available to him if he wants or needs it. Thanks to Benedict's courageous humility, the church will go with her mission in spreading the Gospel of Christ.