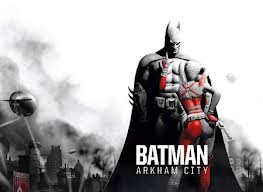 Six months after an attempted jailbreak that was Batman: Arkham Asylum, Gotham city has had some issues.  The warden of Arkham Asylum has become mayor, and has created a new mega-prison for all inmates of Arkham asylum, as well as the local prison facility, Blackgate.  It’s a simple premise: lock all the killers and crazies into the decaying part of the city, wall them in, and let them deal with each other.

When Bruce Wayne tried to speak out against the creation of “Arkham City,” he’s quickly arrested and thrown in, one of dozens of political prisoners. Upon arrival, Bruce Wayne has a brief discussion Dr. Hugo Strange, who runs this particular prison, and who knows that Bruce Wayne is Batman.

So, now Batman has only a few hours before Hugo Strange unleashes his endgame, “Protocol 10.”  Not only is our hero locked in with practically every single one villain he’s ever faced, and all of their henchmen, he’s also on a clock after he finds himself poisoned by – who else – the Joker.

And from there, we’re off to the races.

With the Game of the Year edition, you also get an option to play as Catwoman, whose storyline is mostly about a feud she has going with Two-Face, and robbing the massive vault of Arkham City, that holds all of the prisoners’ property.

Arkham City is an open world “sandbox” game – which basically means that you’re not locked into any one storyline or direct narrative.  There is a solid story here, but you can play through it however you like.  There are even a collection of gadgets at the player’s disposal – from smoke bombs, to freeze grenades, to devices that disable guns.

Part of the moral problems comes in the gameplay.  It can be violent.  And I don’t even mean “watch Batman punch someone in the face,” I mean that the player can use special “one-shot” moves that automatically disable opponents.  These moves include bone-jarring, and bone-crunching moves that allow you to hear the snap and crunch of bones.  It may be because I’ve taken self-defense courses in Krav Maga, the self defense system of the Israeli military, but some of these hurt to even LOOK at.  There are probably some adults who would have problems looking at some of these moves.

However, none of the violence is very far beyond the early 1990s Batman the Animated Series – where several elements of the voice talent comes from.  So, in purchasing this, you might want to look at a few online walkthrough on Youtube before playing.

This game is beautifully rendered.  It’s highly detailed, and it feels like a real city with people who live there.  The background holds endless in-jokes, and is even part of a subplot involving The Riddler and his endless puzzles: to solve the puzzle and save his hostages, there are some riddles where the answers are in the city streets.

And the music has a nice, solid driving theme, and makes the game feel suitably epic as you try to save yourself, and Gotham, and possibly even the world.

Violence aside, this has some you have a definite divide between good, evil, and being insane.   The morally abhorrent acts are taken by the villains.  Our heroes don’t kill, don’t swear, but have no problems dealing out appropriate levels of violence to counter threats to self or others.  Villains like the Joker and Penquin are pure evil, while other enemies, like Mr. Freeze or Mad Hatter, are obviously deranged, and more pitiable than evil.  Even Catwoman, the player character who is more gray than black-and-white, chooses to do the right thing at the end of the day.  And even though few characters die in the game, each death is treated as a loss, even the death of several villains along the way.

Even the more unsavory elements of the bad guys are only implied – unfortunately those elements include cannibalism, and feeding people to sharks.

The biggest problems of the game, on the morality / appropriateness of the game comes with the violence and the language.  We already covered the violence a bit.  If one more bad guy called Catwoman a b!7@h one more time, I was going to throw my remote through the television.  You might be able to give this to a teenager as part of aversion therapy, because after ten minutes this, the average adolescent will quickly tire of hearing the word.  It feels like they couldn’t spend the time or the money paying people for “background thug” voices.

Keep in mind, the ESRB rating is T for teen. The violence is not seriously awful, just highly realistic. Again, judge for yourself – online walkthroughs on Youtube are not hard to find.  You should be able to judge the appropriateness in about ten minutes or less.

At most, this game takes about 22 hours to play through, so there isn’t a lot to be addicted to.  This might last two playthroughs, but after that, the difficulty level becomes more frustrating than enjoyable.

It’s a fun game. Possibly more for you than for your kids, though.  Enjoy.