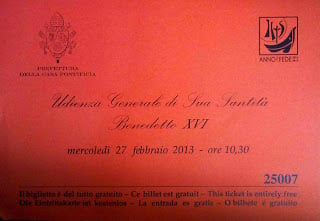 Sitting in St Peter's and praying my rosary today, I couldn't help but think back eight years. I wasn't in Rome at the time for the election of Joseph Ratzinger as Benedict XVI in 2005. Still it seems like yesterday I was at our seminary in Ireland staring at a little chimney which suddenly started to spew white smoke - a historic moment! Today was one more in that series of spiritually earth-shaking moments in the Church and the world.

Today was Benedict XVI's last general audience, and the reading was from St. Paul's letter to the Colossians. Faith lived in fidelity necessarily bears fruit.

What does Benedict  think as he looks out over the Square and see thousands of pilgrims waving flags from almost every country on the face of the earth? It's exactly the same enthusiasm, joy, and hope as 8 years ago and yet so very different. Problems still face the Church and the world, but at the same time, the Church is, alive, young, vibrant, and growing.

He thanked God for the Church, the body of Christ, which includes individual communities around the world which he has visited on his numerous trips. It is the Word of God that gives life and confidence in God's plan.

He accepted the Petrine office because the voice of Christ echoed again in his heart calling him to a new and even more difficult mission, one that will continue even after stepping away from the rudder. There have been moments of light and moments of difficulty,  but Christ had always been in the boat. Christ is at the head of his Church, and he chooses who will lead it.

Not by chance, we live the Year of Faith, confident and certain that Christ carries us in his arms and wants us to experience the authentic joy specific to being Christians. No one can ever take that away from us. God's gift will never be revoked.

As pope, it certainly seems a lonely and solitary path, but he's felt the constant support of numerous coworkers, many people that have accompanied him in his ministry - the Cardinals and the Secretariat of State along with the diocese of Rome. So many have helped and walked along side him on the difficult voyage of piloting the bark of Peter on rough seas.

He carried, and carries, each one of us in his heart of a father through prayer.

But beyond the official thanks to the diplomatic corps and authorities around the world, he thanks so many normal people, who write him as brother and father. The Church is a family, not some organization for religious purposes. The Church is alive, and the Church is young.

After expressing his gratitude to all, he made clear that his resignation was and is a decision made in insistent prayer seeking the good of the Church, not his own.

From the 5 of April onward, he no longer belonged to himself but to the entire Church and the world. Pope Benedict doesn't abandon the cross but will remain at the foot of the crucified of Christ. St. Benedict gives him a great example.

He'll accompany the Church, and asks prayers for himself, the Cardinals, and the new pope. God guides and accompanies his Church no matter what!

Reply with your thoughts and comments - very interested in your reflections!