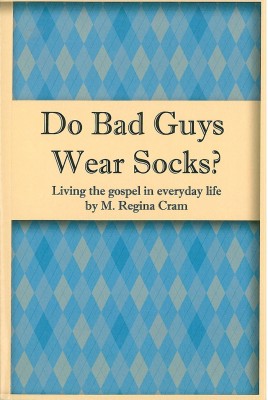 How in the world could a book titled Do Bad Guys Wear Socks? inspire to live out my faith?

Written by M. Regina Cram, Do Bad Guys Wear Socks? Living the Gospel in Everyday Life is a collection of her award-winning columns from the Catholic Transcript (of the diocese of Hartford, CT) and the Hartford Courant. Cram’s candor, laced with humor and free of self-indulgence and melodrama, makes this book a breath of fresh air.

I must insert a disclaimer here: Reg Cram is a lifelong friend but I had no idea she could write like this. The book grabbed me in an instant and never let go.

Cram has led a full life of numerous blessings coupled with equal amounts of pain. Happily married for 34 years, she is the mother of four children and three grandchildren. She also battles mental illness, thyroid disease and arthritis. Her memory is impaired due to a life-threatening fourth pregnancy; she admits to being unable to pay attention long enough to read and has great difficulty organizing.

Yet, to Cram, stubbing her toe and being hopelessly lost in the woods with two small children and no provisions are the same - they have lessons to reveal. She has an edgy humor while being pointed, sometimes blunt and often poignant. Her stories are concise without preaching and laced with a spirit of gratitude. Cram knows how to spin a yarn and let the story reveal the point. A Catholic convert, she never imposes her faith on the reader; she just simply shares. Her stories transcend groups, demographics and denominations.

In the blessings department, Cram reveals a marriage that is rich because of the level of self-sacrificing love. In a column titled “The Gift,” she writes of being overwhelmed and exhausted juggling 4 teenaged children, a difficult family situation and a husband who, for the last three years, had worked 90 hours per week in preparation for the infamous Y2K. Despite his own exhaustion, husband Peter is able to bestow on Reg the greatest gift a woman could ever receive: time alone. His gift to her on her birthday is three days alone in a cabin near the Housatonic River. And she was to leave immediately.

Cram writes, “For three whole days I didn’t have to referee a single sibling argument. I could eat Wheaties for dinner if I felt like it, and drink my morning coffee without needing to reheat it even once. There was no telephone, no traffic, no schedule. It was glorious.”

She continues, “I will always cherish my husband’s extraordinary gift, lavished on me to nurture my soul, and because he loves me … the truth is that Peter’s gift was enormously sacrificial, modeled after the One who sent an even greater gift to a weary and discouraged world. That gift was the most glorious, most tender, most sacrificial gift the world has even known – Christmas.”

Cram’s stories about her children are some of the most endearing. In “To Dance with the Prodigal,” she shares how the search for a beloved toy taught her the true meaning of the Prodigal Son.

Cram aligns herself with the dutiful older brother in the parable who had to endure the continuing destructive behavior of her younger sister, a drug addict. It wasn’t until she met another prodigal, Susannah, that she grasped the true meaning of the story. She writes that, “The funny thing was that my special prodigal is not even a real person. She’s a tattered stuff bunny …”

Every parent whose child has had that special stuffed toy or blanket can relate to this description: “For the next eight years, Tierney and Susannah were inseparable. Susannah was so well known around town that people greeted her by name as if she was a real as the child who carried her. When I used a baby carrier to cradle our newborn against my chest, Tierney tied a bandana around her belly so she could carry Susannah. During outings to the beach, Susannah sat on the towel to guard Tierney’s pail and shovel rom crabs and fishies. It was a sweet and powerful love.”

Inevitably Susannah gets lost. The family searched for months on end and the poor child went to bed each night grieving for her friend.

Susannah is finally found. “Then came the scream of delight when Susannah was discovered in an unused trash bin. Tierney was almost incoherent with joy as she clutched her beloved bunny and sobbed. Oblivious to the world, they danced around like lovers, spinning and laughing and kissing and weeping. And as I watched, I could picture the father running to meet his wayward son, sobbing with joy.”

A college-aged Tierney experiences the foot washing of Jesus in a poignant way in “Service of Love.” Cram describes her daughter and her boyfriend Andrew visiting a church to pray. They spend such a long time there that Tierney gets restless. As they pray in front of the Blessed Mother, Andrew falls to one knee and offers to Tierney a small velvet box revealing an engagement ring. After exclaiming “Yes!” to his proposal, he asks her to sit in a nearby pew. Cram writes, “She watched as he walked over to the pulpit, stooped behind it, and pull out a bowl of water and a towel. Andrew then knelt in front of Tierney, removed her shoes, and proceeded to wash her feet. Once again, the symbolism was clear. Their marriage would be a life of service and that service would begin with Andrew.”

Cram devotes a few columns to the many physical and mental trials she has faced in her life. In the numerous times that she complains to God about her limitations, God poses the question back to her, “What Do You Have in Your Hand?”

Cram goes on to describe these limitations: “a medical emergency robbed my brain of oxygen, leaving me with impaired ability to read, follow sequences and organize … I battle arthritis, thyroid disease and mental illness … We deal with teenage and family issues. Sometimes life is really hard.”

When posed yet again with the question, “What do you have in your hand?” she says, “Not much, Lord. And I have a beat-up body and a leaky mind. I’m not positive, but I’m pretty sure that God replied, “Sounds good to Me. Now let’s see how we can put those to good use.’”

One of my favorites, “I Can Walk,” mirrors my own life. Bad feet, aching legs and a sore back had made walking even a few minutes equal to climbing Mt. Everest. The discovery of a terrific and inspiring podiatrist coupled with the discovery of great shoes has made walking enjoyable again. Every excursion fills me with gratitude. That same gratitude gushes out in “I Can Walk.”

In Cram’s case it is an auto-immune form of arthritis that hampers her ability to walk. In excruciating pain, she is reduced to walking slowly with a cane while contemplating life in a wheel chair. A new, injectable medication was found to help and she was soon free of the cane.

Cram writes, “Still, it was years before I could walk any distance. Gradually, imperceptibly, however, I was able to press a tad further than the day before. At first it was just a house or two, then a few more. The day finally arrived when I explored with excitement to Peter. ‘Guess what? I walked around the whole block, all by myself!’ … I love this renewed ability to walk … I love the second chance that God has bestowed on me, not because I deserve it but simply because He loves to bless His children.”

This is just a slice of the everyday holiness that Cram offers in Do Bad Guys Wear Socks? Am I inspired by this book? You bet!

Order Do Bad Guys Wear Socks? and support CatholicMom.com with your purchase.