To Veil or Not to Veil: That is the Question 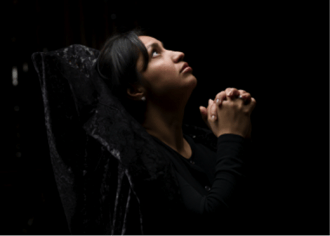 I’ve met some awesome Catholic families who don’t.  Mine doesn’t, but I swear, there’s an unmistakable draw about those veils.

I used to think that mass veils were silly and a sign of some sort of spiritual elitism.  But of course, I was just being a ‘un-covered head’ elitist adamant that I didn’t need no veil to be all holy-like and stuff.  It turns out, I was correct: you don’t need a veil to be holy and those who wear them don’t think so either.

Many choose to wear veils simply out of reverence and I have a deep respect for any family who wants to indicate in their dress that mass time is like no other hour in their schedule.  It’s set aside for Him, and veiling their heads is the indication of that.

But, then, it could just be the Spaniard in me wanting to leap out in passionate, mantilla form.

Deep down, I realize that, if I don’t keep the Spanish Dona at bay, I’d probably show up to church looking something like the picture above.

The important thing when deciding whether or not to veil is understanding that if you don’t, you aren’t doing anything wrong.  No matter what some might claim, the requirement for chapel veils was already in decline when the mass rubrics of the 1962 Missal did not mention them. Similarly, and more recently, the 1983 Code for Canon Law is silent about the subject.  So, no, you are not obliged wear one, but at the same time, it’s equally fine to wear one.

We need to avoid the temptation to believe that some invisible veiled/veil-less rivalry exists somewhere six feet above the temporal plane. Although, that would be an, er, interesting ‘battle’ to witness (The Veils unleashing a hail storm of lacy netting and the Bald Caps deflecting with their copies of the Constitution on the Sacred Liturgy) the truth is that the efficacious grace of the Eucharist is available to to all properly disposed Catholics regardless of headdress.

The important thing, of course, is what’s in your heart … unless it happens to be a flailing Spanish flamenco dancer.  Whatever you do, don’t let her out.  Appease her with chocolate and Gyspy Kings music, but do not, I repeat, do not flamenco in Church.  That might have been okay in the old translation (no it wasn’t) but the new translation, not so much.

To Veil or Not to Veil: The Modern Question
Read
Why wear a head covering or veil to Mass?
Read
Why Women Are Wearing Chapel Veils Again
Read