Titular Church Day & a Look at the Sistine Chapel 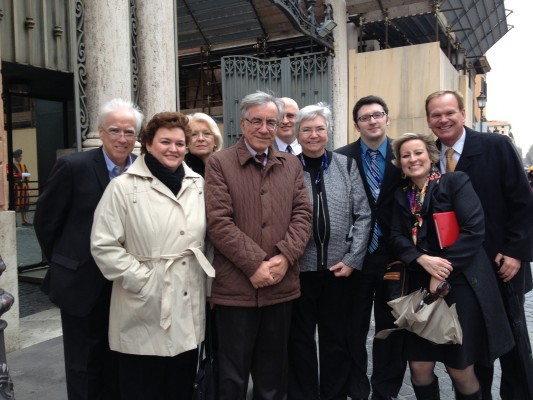 Sunday, March 10: Titular Church Day and media were out in force.

Cardinal Sean O’Malley offered Mass at 10:30 a.m. at Santa Maria della Vittoria, a lovely small church that boasts a Bernini masterpiece and was made popular by Dan Brown’s Angels and Demons. Media jammed both side aisles and the pastor delighted the congregation when he said he hoped the next time Cardinal O’Malley came by he would not be cardinal. Boston reporters were there, as well as blogger and commentator John Thavis, NY Times’ Rachel Donadio, and Catholic News Service’s Carol Glatz. German TV interviewed me, though there was nothing to say since we don’t opine on the media’s topic de jour: Will there be an American pope?
On the way to Santa Maria della Vittoria I passed the titular church of Cardinal Scherer from Brazil, Sant’Andrea al Quirinale, where TV cameras were lined up outside. Footage from there has been on CNN.

I went to Mass at Santa Susanna, my parish when I lived in Rome some years ago. Cardinal Bernard Law, now over 80 and not a voter, was the celebrant at the parish that is served by the Paulist Fathers. It’s the church for the American community in Rome. The 10:30 a.m. liturgy ended with my favorite hymn, Be Thou My Vision. In Italian-American fashion we had cornetti and coffee afterwards. Before Mass, I saw only one group in front of the church. They looked like protesters. After Mass R.D. Saul, anchorman for Boston’s New England Cable Television, sought to interview Cardinal Law, but the cardinal declined. Saul had come over from Santa Maria della Vittoria, which is across the street.

I got back to the office around noon and found a message that authorization for a visit to the Sistine Chapel for the press officers from the United States had come through. Vatican officials were apologetic that we hadn’t had time to sign up for the tour they gave 400 media the previous day. Fortified by cookies from ABC, Don Clemmer and I headed over to the press office as the others raced in from various locations. Mar Munoz of USCCB, Joe Zwilling from New York, Angela Flood from Washington, Colleen Dolan from Chicago, Terry Donilon from Boston and Tod Tamberg from Los Angeles all got there just in time for a tour led by Doctor Angelo Scelzo, vice-director of the Vatican Press Office. It was amazing.

Workmen were still painting the windows so no one will be able to see in but the part of the chapel for the electors seemed all set. We couldn’t enter that section of the chapel but could see a name card was at each place and saw the seats reserved for Cardinal Sean O’Malley of Boston and Cardinal James Harvey, the Milwaukee native who now is archpriest at the Papal Basilica of St. Paul Outside-the-Walls. Tan tablecloths and red skirting covered the long tables. At each place was a red leather folder, prayer book, the Ordo Rituum Conclavis (prayers for conclave ritual), and a blue, ballpoint click pen. All of this beneath and before the majestic paintings by Michelangelo. We studied the much described stoves for burning the ballots with their tall copper smokestack amidst gold painted scaffolding. We resisted the temptation to push the button marked “Start.”

Dozens of Swiss Guards in mufti (black suits) milled about as their colleagues in colorful uniforms stood guard. We hoped to get into the Pauline Chapel, where the Conclave rituals begin Tuesday afternoon, but a Swiss Guard sentry wordlessly made it clear that was not to be. All of us were in great form after this treat. We had our pictures taken with an agreeable Swiss Guard and then posed for a group photo with our generous guide, Dr. Scelzo. It was a perfect Rome Sunday, and when it began to rain, six of us ducked into a restaurant on Borgo Pio for pasta.

Challenges tomorrow: media conference, arranging for a class picture of our cardinal electors as they move to the Domus Sanctae Marthae, and helping arriving media find stories.