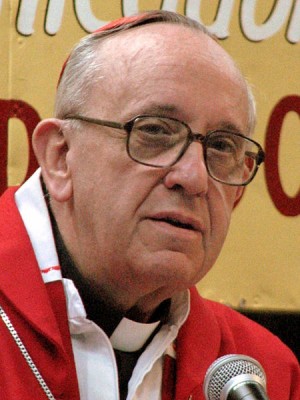 SAN FRANCISCO, March 26, 2013 – With Easter upon the world’s Christians, the desire to get to know the new leader of the Catholic Church is ever-increasing. From his first words on the loggia to the many addresses he has already made, the interest in what this Pope teaches and how he will pastor over a billion Catholics has become a regular part of daily dialogue at office water coolers, on nightly news shows and through Facebook commentary.

And there is no better way to get to know one’s philosophy than to read from their scholarship. Ignatius Press will release first in Spanish and then in English, four volumes, which are drawn from a series of addresses Cardinal Bergoglio gave in 2005 to the Archdiocese of Buenos Aires. The books will reveal the Cardinal’s deep Ignatian spirituality.

In the first volume, Cardinal Bergoglio subtly distinguishes between sin and corruption. He argues that continuous complicity with sin leads to corruption and ultimately to social collapse.

By attending to the dangers of sin and corruption we open ourselves to be transformed by the perfecting and liberating message of the Gospel.

In the second volume, Cardinal Bergoglio introduces us, in a profound meditation, to the writings of San Doroteo de Gaza, and orients us down a path towards humility and love, which are necessary components to form real Christian communities. He addresses the vice of focusing on others’ sins. To overcome this bad habit, he proposes the practice of self-accusation, in which individuals and communities reflect on their own shortcomings and sins.

In the third and fourth volumes, the new Pope speaks to and challenges educators: How far can we walk without a clear path? Where can we go with no goal to guides our steps? What is the way out of these difficult times the world is facing? He urges those in academia to form tomorrow’s leaders who will guide us towards Christ and his destiny for humanity. And specifically in the fourth volume, he challenges educators to deepen their commitment to teach with passion and zeal as Jesus the master teacher did. This volume will include key readings for individual as well as group study.

All four volumes in Spanish are available now for pre-order at www.ignatius.com. Volumes one and two will be combined into one volume for the English language, and will be released together in April.