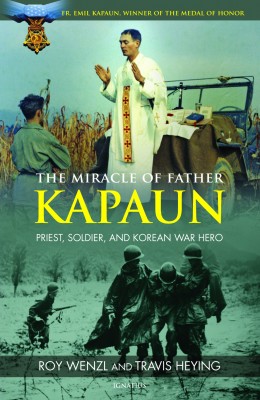 he Miracle of Father Kapaun

Editor's note: Today, Fr. Emil Kapuan, the subject of the new book The Miracle of Father Kapaun, will posthumously receive the Medal of Honor at the White House. To celebrate this event and the launch of the book, we are partnering with the book's publisher Ignatius Press. Leave a comment below to be entered to win one of two copies of  The Miracle of Father Kapaun. See full contest details below. LMH

Priest recipient of Medal of Honor subject of new book

ATLANTA, April 3, 2013 – Fr. Emil Kapaun will receive the Medal of Honor from the President of the United States next Thursday at the White House, nearly 60 years after he heroically gave his life in the Korean War. The Vatican is also considering him a possible candidate for Sainthood.

And today, his life, service and hero’s death is the subject of an incredible new book, he Miracle of Father Kapaun, published by Ignatius Press.  One of the most remarkable aspects of his story surrounds the atypical movement of support for both his sainthood cause and his Medal of Honor award.  The witnesses to both his sanctity and his bravery have come from non-Catholics, men of Jewish faith, Muslim faith and Protestant tradition, who served with Fr. Kapaun in battle or in the brutality of conditions where he drew his last breath – a prisoner of war camp. They have spent years petitioning the Vatican to elevate him to Sainthood because of what they witnessed on the battlefield.

In tracking down the amazing story of Fr. Kapaun first for the Wichita Eagle newspaper, authors Roy Wenzl and Travis Heying uncovered a paradox. Kapaun’s ordinary background as the son of Czech immigrant farmers sowed the seeds of his greatness.  This is a true patriot’s story. Says author Roy Wenzl, “Kapaun’s friends do not consider themselves experts on miracles, but they know what they saw, and as far as they are concerned, the man himself was something like a miracle. By the time we talked to most of them, the secretary of the Army and the chairman of the Joint Chiefs of Staff had learned enough about the already decorated U.S. Army captain to recommend him, posthumously, for the highest military honor in the United States. The Pentagon is in the business of declaring war heroes, not saints. But to many of Kapaun’s eyewitnesses, they amount to the same thing.”

To enter to win one of two copies of the Miracle of Father Kapaun, leave a comment below by midnight Pacific time on Thursday, April 18, 2013.

Order The Miracle of Father Kapaun and support CatholicMom.com with your purchase.

On path to Sainthood, Catholic Priest will receive Medal of Honor
Read
Win "The Miracle of Father Kapaun" Book and DVD
Read
A Miracle for Monday
Read