Does anyone remember Bishop Fulton Sheen? 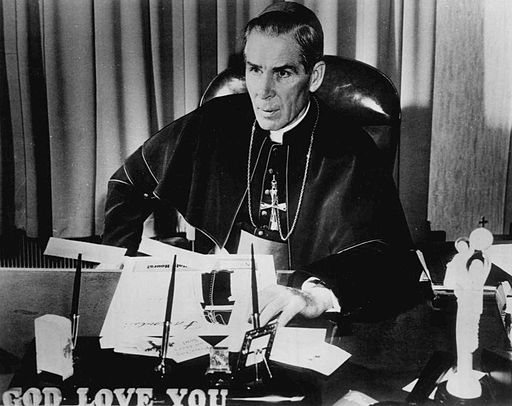 In case you don’t – and there are few who do – Bishop Fulton Sheen was a star of radio and television off again and on again from 1930 to 1968.  All Fulton Sheen did was come on the air and teach Catholic philosophy. In fact, his time was spent discussing natural law and how it fed into and informed Catholic teachings.  And he had the highest rated show on television.

When his television competitor comedian Milton Berle was asked why his comedy show was being beaten in the ratings by a Catholic priest, he said that Sheen had better writers – Matthew, Mark, Luke, and John.  Why can’t we do that today?

Funny thing about that …

Not long ago, I was accused of promoting a practice that was completely useless, because it wasn’t conducive to evangelization – that practice was video games. I pointed out that not only were people not obliged to do everything just to spread the Word, video games such as World of Warcraft can put a player in touch with millions of living and breathing individuals who one could easily spread the Word to.

If you think that was interesting, wait until you check out YouTube.  Not only have old Fulton Sheen episodes been resurrected on YouTube, we, each and every one of us, can be a Fulton Sheen.

If you’ve never heard of a video log, or a Vlog, welcome to the 21st century, where anyone with a $30 web camera can be their own TV host.

Even I’m doing something similar. Most of my talents lie in writing books.  In my case, the novel A Pius Man – written under the name Declan Finn – centers around the figure of Pope Pius XII.  I wrote it as a thriller, since more people seem to get their history from Dan Brown novels than from history books. And I had a history degree I wasn’t doing anything with, so, why not?  And, with another piece of interesting technology – called Publish On Demand – I didn’t need your standard, large, anti-Catholic publishing house to go through.

In order to sell the book, I’ve made YouTube-based commercials, and, you guessed it, Vlogs.

Seriously, I have seen people who put in a lot of time and energy and production value making videos about video games. So why isn’t there anyone out there tearing up YouTube with “rockin’ Catholic videos”?  I’m not sure, maybe they are and I just haven’t tripped over them lately.

If you’re wondering why I haven’t done it myself, there are two good reasons for that. One, I’m trying to spread the Word in my novel, which I’m trying to sell.  And, second … try looking at the Vlogs I’ve done. I can’t see myself being the next Fulton Sheen. Or even the next Charlie Sheen.

As I noted in my last column, one can take the day-to-day questions about the Catholic faith, and write a book about it – or make a YouTube video.  In the case of YouTube, the responses are far more immediate.  Granted, I can write whole novels answering the various and sundry questions I get, but some people can’t.  A $30 webcam isn’t hard to come by, and if you can string together a sentence, you can do a vlog. Even if you can’t, that’s what Windows Movie Maker is for.

We can reach out and touch practically anyone now on the internet.  Publish on Demand can release whole books, and YouTube can contain hundreds of hours of religion plastered online.  Instead, there are hundreds, possibly thousands, of hours of stupid cat videos.

Let’s see if we all can’t change that over the coming year.