Terrorism at the Boston Marathon: Connections, Reflections, Evil and Good

Editor's note: I am grateful to Susan Bailey for her sharing of this touching article, which was written shortly after the violence in Boston. Please join us in continued prayer for all of those impacted by this tragedy. LMH 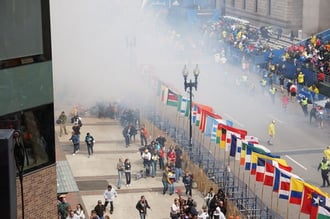 The last five days have been utterly surreal.

As a lifelong resident of Massachusetts now living in the central part of the state, our family has roots that go back to the Governor Winthrop fleet in 1630 when Allan Bread (ne: Breed) came over. My mother, God rest her soul, was a direct descendant.

I grew up in Wellesley and still work there; it’s twenty-seven miles from Boston.

My sister and her husband recently sold their share of their business to their partner. It’s on Arsenal Street in Watertown, blocks from the headquarters for local and federal law enforcement during the siege that overtook that city over the last twenty-four plus hours.

Both of my nephews ran in the Boston Marathon. According to his time, my younger nephew would have crossed the finish line just as the bombs went off.

Our office in Wellesley was closed yesterday. It’s right on the marathon route.

Marathon Day is very special to Bostonians and people from all around the world. Begun in 1897, the Boston Marathon is the premier race in the world. It’s used as a qualifier for the Olympics. It attracts the cream of the crop. Tens of thousands run this race, many as a means of raising funds for their favorite charity.

We celebrate in our office with popcorn and soft drinks, watching the endless wave of runners from the door and then cheering on the winners on TV.

Boston is my home. The Boston Marathon is a shining jewel of that home, celebrated on Patriot’s Day, the day freedom began to take hold in America.

Evil invaded my home, turning it into a war zone.

At first it was impossible to believe. Two bombs going off near the finish line. Three killed, so many maimed for life. An eight year-old boy was among the deaths. How could this happen?

An important international story was unfolding in my own backyard.

News junkie that I am, I was glued to the computer, watching all the local news stations simultaneously and following Twitter like an addict.

What the hell was happening?

On Thursday the story began to grow bizarre. The FBI, out of options, revealed to the world video tape footage and still photos of the two suspects. Suspect #1 in the black baseball cap. Suspect #2 in the white cap with the golf label. One picture showed Suspect #2 very near to Martin Richard, his sister and mother. Martin was killed in the blast.

Everyone held their breath. Either these two would slip away quietly or all hell would break loose.

I dropped off to sleep on Thursday night hearing something about a shooting at MIT. I dismissed it as unrelated and shut off the TV.

At 4 am my husband woke me up with an unbelievable story: the MIT shooting was, in fact, related. The two suspects shot and killed Sean Collier, a 26 year-old MIT police officer in cold blood. They car-jacked a Mercedes Benz SUV and ended up in Watertown where a furious gun battle ensued between them and police. I couldn’t believe my ears when my husband told me the suspects threw bombs and grenades out the window of the SUV at police.

Suspect #1 was killed. Suspect #2 backed over the man (his own brother) in the SUV and escaped, eventually leaving the car and running away on foot.

In Watertown? My own backyard? This was beginning to sound like Israel, Iraq, Afghanistan.

Again I glued myself to the TV, computer and iPhone following the events. My stomach tightened more with each hour. I tried to pray and could not except for an occasional “Lord Jesus Christ, have mercy on us!” I tried to sleep but could not. Home alone after the office had closed, I thought twice about leaving doors open on such a warm day and opted to keep them closed. I was safe in Central Massachusetts yet I did not feel safe at all.

Boston and surrounding cities and towns (Belmont, Brookline, Newton, Allston-Brighton, Waltham, Cambridge) totally shut down. No public transportation. No taxis for a time. No commuter rail running past the back of my house for the whole day. Businesses were closed. The streets were utterly deserted as people, urged by Governor Deval Patrick and Major Thomas Menino hunkered down in their homes with the doors locked.

The police were searching for more undetonated bombs.

Watertown became a war zone. Federal, state and local law officials descended upon the quiet city in unprecedented numbers. Many of the vehicles brought in resembled tanks. Never had I seen such a show of force.

Despite my morbid curiosity, I felt full to overflowing and had to shut it off for a time. I was amazed how tired I was from the stress even though I was just an observer. Yet sleep would not come. The knots in my stomach continued to tighten. The fiery pain from a small patch of shingles that had been diagnosed on my back expanded around my abdomen. My mind was calm but my body acted out otherwise.

Again I tried to pray and could not. I was grateful that there were so many others around the world who could pray for all of us. I thought of those brave police officers.

A press conference was held around 5:45 in the evening of that day. It seemed the police had failed to find the suspect and they lifted the “shelter-in” order; people could now leave their homes and move about.

That’s when all hell broke loose on 26 Franklin Street, Watertown.

A man, stepping outside into his yard to catch some fresh air, noticed that his large boat, still shrink wrapped for the winter, was disturbed. One of the ties was cut, deliberately. And there was a trace of blood. Grabbing a ladder, he climbed up, pulled back the shrink wrap and tarp and peered in. He saw a pool of blood and a crumbled body cowering in the boat.

How he was ever able to peer inside that boat I will never know. But his curiosity, and bravery, led to the arrest of Suspect #2.

It was not without a wild gun fight. People were quickly evacuated as police feared Suspect #2 might have bombs strapped to him. His older brother had on a suicide vest when he was killed and the bomb exploded. Somehow at this point I was able to pray and begged God to protect these brave men. After many tense minutes the police had their man. A cheer went up in the crowd.

Grateful residents lined the streets, forming a gauntlet as law enforcement began to leave in their vehicles. Cheers, applause, the waving of flags, the pumping of fists. The brave police earned their due.

I thanked God for their safety. Too many had lost their lives or had their lives changed forever by the inexplicable harm brought on by Suspects #1 and 2.

I marveled at the bravery and tenacity of law enforcement officials who risked their lives to protect the public.

I reflected on the first responders who, immediately after the bombing, ran towards to the scene to help the victims. Many lives were saved by the bravery of those people.

I thought about the runners who continued running after crossing the finish line to area hospitals to give blood. So much blood was donated that the blood banks became full.

Citizens stood tall, frightened but unbowed by the terrorism that invaded their lives. Bostonians rose to the occasion. I felt proud of my heritage.

Mayor Menino has served five terms as mayor of Boston. With deep emotion he said that he was never more in love with his city than he was now.

I am too. My ancestors would be proud.

This story is far from over. There will be the continued investigation and endless questions. But for now I just want to take the time to remember all those who did so much to help the victims and protect the public.

Evil is a mystery that cannot be explained. It is a part of our broken world.

The mystery deepens when so much good arises from it. In the midst of ugliness and chaos, good continues to triumph. People find strength in themselves they never thought they had, allowing them to perform heroic acts for their neighbors.

I want to cling to that thought as this story continues.