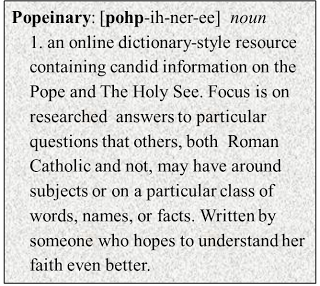 One of the things I've often wondered is what happens (gasp!) if the newly elected Pope doesn't *want* to be Pope? I mean, what if he knew he were getting to old/sick, really believed that he wasn't the right choice, etc.? Can he say no?

There were three previously elected Popes who all turned down the offer of the job - at least three, if you think about it. As the conclave is sworn to secrecy, it's more than likely happened where someone has said no and they have had to make another choice - we just aren't told. Back to the three that we "know" of - two of them were later made into Saints, so appariently there is some understanding if you say no, too!

1. St. Philip Benizi: during the long (three year!) papal election started in 1268, the cardinals were in heated disagreement over who should become the next Pope. Legend has it that - in 1271 - Philip Benizi came to the Cathedral to try to get things moving along, but fled and went into hiding when he heard his name was being considered as the next pope. Talk about not wanting the job! (source)

2. St. Charles Borromeo: not much info available on this one (no matter where I searched!), but in the 16th century, Charles Borromeo was said to have said "no" to the position. (source)

3. Cardinal Robert Bellarmine: again, not much info available other than that Cardinal Bellarmine declined his election in 1621. (source)

For me, this is such an interesting process. Unlike the election of a President of the United States, where a person willingly WANTS to become President and puts their name out there, this is so so different. You may not want to be elected Pope, but - through prayer - your peers may feel you are the best choice to lead the Church. What a strange, intense, powerful feeling that must be!