From Hollywood to Holy Life

Editor's note: I've been fortunate enough to have a sneak peek at THE EAR OF THE HEART: An Actress’ Journey from Hollywood to Holy Vows by Mother Dolores Hart. A fascinating read, this book gives us an insider's perspective that is as timely today as when Mother Dolores was living out her spiritual transformation. The book is set to release on May 7th, but is available for pre-order now. LMH

Revealing the path from Hollywood to Holy life 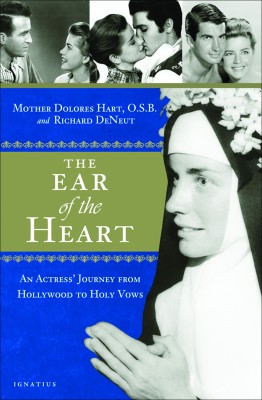 The Ear of the Heart by Mother Dolores Hart

SAN FRANCISCO, April XX, 2013 – Dolores Hart was a rising young actress in Hollywood in the 1960s, with 10 highly successful movies to her credit. Then, she made a shocking decision: Hart left the glitz and glamour of Hollywood and entered a contemplative monastery.

Now, 50 years later, Mother Dolores gives a fascinating account of her life, with co-author and lifelong friend Richard DeNeut in THE EAR OF THE HEART: An Actress’ Journey from Hollywood to Holy Vows.

Dolores was a bright and beautiful college student when she made her film debut with Elvis Presley in Paramount’s 1957 Loving You. She acted in nine more movies with other big stars such as Montgomery Clift, Anthony Quinn and Myrna Loy. She also gave a Tony-nominated performance in the Broadway play The Pleasure of His Company and appeared in TV shows, including The Virginian and Playhouse 90. An important chapter in her life occurred while playing Saint Clare in the movie Francis of Assisi, filmed on location in Italy.

Born Dolores Hicks to a complicated and colorful Chicago family, Mother Dolores has travelled a charmed yet challenging road in her journey toward God, serenity and, yes, love. She entered the Abbey of Regina Laudis in Bethlehem, Connecticut, at the peak of her career, not in order to leave the glamorous world of acting she had dreamed of since childhood, but in order to answer a mysterious call she heard with the “ear of the heart.” While contracted for another film and engaged to be married, she abandoned everything to become a bride of Christ.

“The story of Dolores Hart teaches us to seek God regardless of where we are-in a summer storm, in prayer or even in front of a camera,” says Raymond Arroyo, New York Times bestselling author, host of The World Over Live, and EWTN news director.

Preorder THE EAR OF THE HEART: An Actress’ Journey from Hollywood to Holy Vows and support CatholicMom.com with your purchase