Have you had “The Talk” with your middle-schooler? 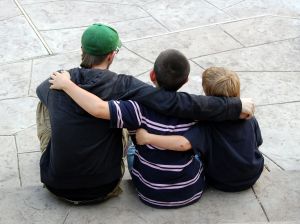 A few years back, when my oldest was seven, he was enthralled with Captain Jack Sparrow and Pirates of the Caribbean. He dressed up in a black cape (does Jack Sparrow even wear a cape?) and brandished a sword left over from the previous Halloween. He then grabbed an empty milk jug, lifted it to his lips and slurred his words, “I am Captain Jack Sparrow!”

And that sword figuratively pieced my heart for a moment. No, no, no.

Not only was he modeling Captain Jack’s pirate skills, he had taken in the plot-line that glorified rum, that rum was a wonderful drink Jack had to have; and it made him act funny.

One of my fears is that one of my children will become alcoholic. I worry about this because of heredity. I meet women in meetings who have been sober 20 years yet their grown child still gets become an alcoholic or addict. These women modeled sobriety for their kids and yet, it wasn’t enough.

Isn’t that a mother’s fear—that what we do won’t be enough? That our children will make our mistakes no matter how much we try to shield them?

I remember drinking for the first time at 14. This was pretty typical for a middle class high school teenager in the 80’s. I over-drank on every occasion, never having the ability to pace myself or moderate. High school is when our children will be introduced to alcohol outside the home. Have we prepared them?

The strategy my husband and I have taken focuses on the negative implications of drunkenness. We want to instill in him a disdain for excessive drinking. Here I list the five things we incorporate into developing our children’s attitudes about alcohol. I see this “Talk” as more important than the sex talk, because alcohol kills.

Remember, son, when Uncle Bobby was asleep during Michelle’s wedding, and Dad had to help carry him out to the car? Remember you had to sit in the hatchback because he took up the whole back seat? You’re old enough now to know the truth. He wasn’t “asleep.” He was drunk. And his body couldn’t take any more alcohol so it shut down on him, causing him to fall asleep at the table even before Michelle and Tom cut the cake.

Guilt definitely has its purpose. In my opinion the purpose of guilt is to establish social norms in order that deviating from them causes one to feel guilty, which in a healthy heart sparks a desire to change.

Sweetheart, when you’re out in the world without me or Dad, I know you understand that you’re supposed to behave with good manners and conduct yourself in ways worthy of our family name. When people drink too much, they’re unable to control what they say or do. We would really be disappointed to hear you had embarrassed our family by getting drunk or drinking so much you behaved badly. What you do is a direct reflection on our whole family. You know this, right?

3. Use facts, the law, and statistics.

In 2008, 11,773 people were killed in alcohol-impaired driving crashes, accounting for nearly one-third (32%) of all traffic-related deaths in the United States. The scariest part of drinking, for me and your Dad is the fear that either you or your brother will get in the car with somebody who has been drinking. Under no circumstances are you ever to get in a car with somebody who has had even one alcoholic drink. If we find that you did, then you will face severe punishment and loss of privileges.

Alcohol is a powerful depressant drug that slows down thinking and reaction time, as well as other activity of the brain and spinal cord. It rapidly enters the bloodstream and circulates to all parts of the body within a few minutes. When it reaches the brain it knocks out control centers, causing intoxication. Even small amounts of alcohol can reduce coordination and slow reflexes.

Regardless of age, driving while intoxicated is illegal. You will be arrested, lose your driver license and be sent to jail.

Grab the ipad and google “Catholic Bible verses about drunkenness.”

Honey, look at what God says about drinking too much. Of course, drinking alcohol itself is not a sin. But like with a lot of things, when we use alcohol illegally (before age 21) or recklessly (by drinking too much) we break God’s laws.

I wrote to you not to associate with anyone who bears the name of brother if he is guilty of immorality or greed, or is an idolater, reviler, drunkard, or robber—not even to eat with such a one (1 Cor. 5:11).

. . . envy, drunkenness, carousing, and the like. I warn you, as I warned you before, that those who do such things shall not inherit the kingdom of God (Gal. 5:21).

And do not get drunk with wine, for that is debauchery; but be filled with the Spirit (Eph. 5:18).

Our Catholic faith doesn’t condemn alcohol, wine, or drinking in moderation, but the Church does caution against excessive drinking. The Catechism states:

“The virtue of temperance disposes us to avoid every kind of excess: the abuse of food, alcohol, tobacco, or medicine. Those incur grave guilt who, by drunkenness or a love of speed, endanger their own and others’ safety on the road, at sea, or in the air” (CCC 2290).

What is the one thing teens want? To be treated as adults.

I know, son that you are very mature for your age and you’re growing into such a fine young man. But some kids are not as responsible as you. It may be up to you to take care of a friend who is drunk. You may have to be the responsible one to protect your classmates, the girls from doing things they will regret. Being a grown up means you are responsible. It is impossible to act responsibly when drunk. So be sure never to drink to excess.

So, moms, let’s be sure to have “The Talk” with our children. We can’t leave their understanding of alcohol to their friends or Hollywood.

A wonderful resource for us comes from Students Against Drunk Driving (SADD). I typically like student initiated advice because it is more on target when discussing important matters with my children. Click on this link for the “Opening Lifesaving Lines” brochure.