This is the Church

The other day, I found the Church in my mail.

Not email, but the snail-mail variety -- old school. The envelope was hidden among the pile of mostly junk, and since it bore the return label of our kids' school network, Blessed JPII Catholic Schools, I figured it was yet another notice of lunch money due, a report card reported, or a meeting mentioned.

But when I opened it, I found something that took my breath away -- my father's name. 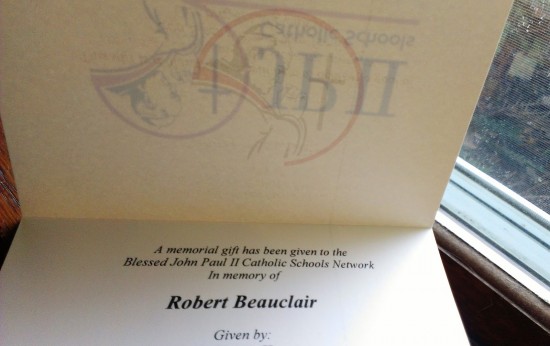 Robert Beauclair, the man who helped bring me into this world and taught me how to fish and write.

The memorial came from a teacher of my daughter's and his wife; money had been donated to the school in honor of my father, who left us Jan. 11 of this year.

They didn't know my father. He lived three hours away and stayed close to home these past years as he suffered through the effects of diabetes. They likely didn't know he'd been reared on Catholic schools, and how his vivid recollections of those days with the nuns had made me wish, as a younger parent, that our kids could experience the blessing of learning in a faith environment, too.

Dad would have been touched knowing someone had thought of his grandchildren enough to donate money to their school and their Catholic education on his behalf, even though the donor and honoree had never met.

As I read the card in the minivan at school pick-up time, the tears began to flow. And in that moment of profound gratitude mixed with joy and some sorrow, too, the thought occurred to me: this is the Church.

The Church isn't what we see and hear in visual sound bites on the evening news. It isn't even the beautiful buildings in Rome, nor the astounding art housed within them -- good things in their own right that point us to the divine. The real heart of the Church is the Holy Spirit working through its people.

This doesn't just happen. We aren't inclined, as human beings, toward generosity. Something must prompt us to reach out in love to a stranger, and that something must be so strong, so compelling, that it would nudge us to think of someone we've never even met, and not only that but respond in love.

Before losing my dad, I'd read of money donated on behalf of so-and-so to thus-and-thus organization, and I didn't really understand it. But I get it now. It's a big, big deal to honor the dead in this way, and in so doing, to love the living. Because I know this gift, though in his name, wasn't just for my father but for those younger ones who exist in part because Dad helped give me life. It was borne out of hope and love -- two things the Church does very well despite what the world says.

We get so caught up in the negativity of the world and the Church's necessary response that it's easy to forget the essence of who we are, our common source, and how our fellow brothers and sisters, people of God all, are spreading light to one another one card, one hug, one simple word at a time.

Perhaps I need to make this a regular offering. Consider this, then, the first installment of, "This is the Church." If you have examples of how the Church has brought life to your world in quiet but powerful ways, I'd love to hear them to share in a future post!