At the end of my oldest son’s cell phone service agreement, he decided to switch to a Windows OS phone (Nokia Lumia) mainly due to the xBox Live association.  He had it for about 3 months and the phone unexpectedly crashed.  By the time of the crash, the former iPhone user was beginning to realize he missed the apps and capabilities of the iPhone (and the new version 5 was just launching at that time), and asked to go back instead of replacing his Windows platform phone.

[As an aside – especially families with multiple phones on your plans – do you ever notice it is never the person who wants or worse yet needs the upgrade that is eligible?   Nevertheless, when you are “the best mom in the world,” you can be persuaded into giving up your upgrade for your eldest son.]

Enter my middle child, 14, who at that point only had text capabilities on what we dubbed the ‘stupid’ phone, gallantly piping in to offer to take the Nokia replacement phone so that his brother can return to iPhone nirvana.  So back to the iPhone older brother went…fashioning us into an iOs, Android, and Windows blended family … but this review isn’t about iOs or even the Android – instead this is my first Windows review. 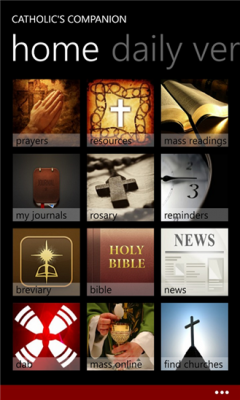 Cost is 99-cents for the ad free version; you can get a version with ads for free.  I didn’t notice the ads too much while skimming through the app, except occasionally when the banners refreshed and the entire screen flashed, which was annoying, but not something that would deter me from using the free version.

The menu screen looks very different than the Android market with big graphics square mini-windows, which made navigating super easy.  Below is my brief summary of the 12 navigation options:

There are approximately 30 prayers on this page of the app.   Prayer you want not there?   No problem, simply use the “add a prayer” (a template opens where you can write your own or copy it from another source) or “find prayer online” (links to Catholic.org) features.

Lists the Beatitudes, Stations of the Cross and Ten Commandments; as well as the responses from the Roman Missal.

Most of the features on this app, including this one, require a Wi-Fi connection or data plan.   The Mass readings are from the United States Conference of Catholic Bishops (USCCB.org) site.

Link opens up electronic journal (you can actually have multiple journals) in which to make notes and/or observations in.

I was particularly excited to see the inclusion of the Fatima prayer under the ‘prayers’ menu.  My enthusiasm for this may have due to just recently learning that I will be going to Fatima for the first time (and Avila, as well) in March 2014, as a guest speaker for a pilgrimage.

I really enjoyed how the developer created the app because as you arrow through the prayers, the phone vibrates and even makes a little buzz – which gives a more tactile feel to the rosary, which I miss when not using my beads.   The app also has an audio version, which was also well done.   The audio program lacked any graphics; which I often find a nice addition for contemplation on the mysteries.

“Add Prayer Reminders” –  how many times do we tell someone we’ll pray for them? – I loved that I’d be able to log it, and then get that all-important reminder!

Connects to ibreviary.com for the Office of Readings, Lauds, Daytime Prayers, Vespers and Compline.  Also available -- menu links to the particular parts of the daily lecture, prayers and rites, and missal – all through ibreviary.com

Connects to various version of the Bible on usccb.org.

Lists the day’s headlines, and connects to Catholic News Agency for them.

Which stands for “Daily Audio Bible,” a podcast which lasts about 44 minutes.    A second tab links to Daily Audio Proverbs also from the daily audio bible website and is only 5 minutes.   There is no commentary; it is purely a reading of the scripture or proverb for that day.

As a big fan of Catholic TV, I was very excited to see this section of the App links to the daily masses from this station.   On the day I was exploring the program, May 7, I happened to know the priest celebrating the Mass as well as the 2 seminarians who were there helping serve.

I was surprised this section was not linked to masstimes.org, instead it is a simple web search.   A search window is provided where you can input either a city/town and state, or the name of a Church, click “find this church” and it brings up options in a separate window from the web.

In addition to the above mentioned menu options - you can also get a daily verse and daily saint by swiping the home screen left to right.

Overall I loved the clarity of navigating, as well as huge and clear quality of the screen and graphics.

My only disappointment was in the lack of Catholic apps available for this operating system.  It was my first time using a Windows smartphone, and I was really impressed.  Most of all, I really liked the quickness of the web browsing capabilities; perhaps it all just seemed better because I’m still waiting for my own phone upgrade. 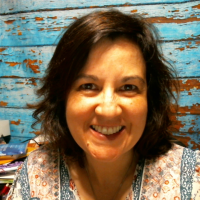