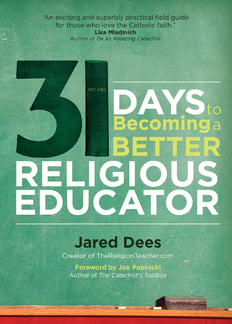 Editor's note: Today, we congratulate our fellow CatholicMom.com contributor Jared Dees on the launch of his fantastic new book 31 Days to Becoming a Better Religious Educator.  Since every Catholic parent is the primary religion teacher for his or her children, this is a book that belongs in every Catholic home. It would also make the perfect "end of the school year" thank you gift for every Catholic teacher in your life. Kudos Jared! LMH

Last weekend my wife and I were given a compliment we really needed to hear. After Mass one of the older couples that dares to sit near the Dees family told us that our two year old has been acting so much better at Mass.

It was like a weight had been lifted off of my heart. We had been trying so hard to motivate her to settle down during Mass for at least a year.

About four or five weeks ago, it came to a breaking point.

We participated in an evening Mass that was horrendous. Now granted, it was the Saturday vigil and it threw off our dinner schedule, but it is no excuse for the behavior she displayed. We spent most of the Mass in the crying room, but eventually it got to the point that she was so bad I couldn't even bear to distract the moms, dads, and children who were trying to keep their own little ones quiet!

Thankfully, we had driven two cars to church that night. After Mass, I told my wife, "I got this."

In the car, that daughter of mine knew she had something coming. I was so angry; I felt like ripping her head off--I mean really screaming at her.

Instead, I followed a simple format for the conversation that I'll share momentarily. I was stern. I was clear and she was sorry. She also remembered the conversation next time we went to Mass. I'm not saying I solved the mystery. We've still had to take her to the back of church since that night, but she clearly tried a lot harder after our conversation. Maybe she's just a month older and naturally settled down, but I like to think that our talk was a turning point for us.

What Motivates Children to Do What's Hard?

It really isn't her fault. When you see children acting out in Mass, don't blame the parents and have pity on the child. Sitting still and listening for an hour is not a skill they are born with. They have the attention span of two minutes, max. They are still learning the correct behavior in church.

But how do you motivate even a toddler to develop skills beyond their current abilities? I agree with educational psychologist, Carol Dweck, who says that it part of the challenge comes down to mindset.

How do you cultivate a growth mindset? Try mixing in positive feedback with constructive criticism. The more a young person believes in herself, the more she will feel she has the capability to overcome the challenges in her future.

To do this I like to use the Sandwich Approach, a technique I learned while working for the sports education program at the University of Notre Dame called Play Like A Champion Today. It is also the technique I used to control my anger with my daughter after Mass that day when we had hit our breaking point.

Traditionally, a sandwich has two pieces of bread with something in the middle like meat, peanut butter and jelly, or, my personal favorite, Nutella.

The sandwich approach to giving positive feedback looks like this:

In each instance, we state something specific and believable. We compliment a child on something they know they've done well or mastered. It reinforces the idea that they have the ability to do something even when it is hard.

Finally, we end with a word of positive encouragement to share our confidence that they can overcome this particular challenge and make a change in the future.

An Example of the Sandwich Approach

Here is how my conversation with my daughter went after Mass that day:

"That behavior was unacceptable and I am very disappointed.

There were two times during Mass when you were listening and singing. When we stood up for the Alleluia, it made me very happy to hear you sign a long. And after communion, I was glad to see you said your prayers. (Positive Compliment)

But the way you behaved during the readings and when Father was saying the prayers at the altar today was completely unacceptable. You know that we sit on our bottoms during Mass and we listen and watch. We do not get out of our seats. We do not crawl on the ground. We do not whine and cry. We sit on our bottoms and listen quietly. When it is time to sing, we sing together. But we do not get up out of our seats. (Constructive Criticism)

The tone I took while saying all this was unlike anything she had heard me take before. I said a lot more, but this was the basic structure. She felt very sorry. The car ride home was completely silent, except for one moment about two minutes from our house when she said, "Sorry Daddy." She even apologized to my wife when we got home. And most importantly, she remembered what I had said the next week at Mass.

Like I mentioned, it may be that she's just a little bit older now. It may be that she's got a better attention span now than she did a few weeks ago. But neither she nor I feel that bad behavior at mass is just a result of her personality, genetics, or age. She's not doomed to misbehaving at masses. She can get better and she has gotten better.

How do you make sure improvement is possible?

It's all about the mindset--a mindset that is formed by the way we give our children feedback. Think positive even when you're angry.

This article is an adaptation of the principles in the exercise in Day 18 of 31 Days to Becoming a Better Religious Educator: "Day 18: Practice Giving Positive, Constructive Feedback."

Jared Dees is the creator of The Religion Teacher, a website offering practical resources and teaching strategies for religious educators, and the author of the new book 31 Days to Becoming a Better Religious Educator. Jared works in digital publishing at Ave Maria Press managing websites like Together for Life Online and thinking strategically about various forms of media including eBooks, eTextbooks, webinars, websites, and social media.

Order 31 Days to Becoming a Better Religious Educator and support CatholicMom.com with your purchase