A Pope for the Rich? 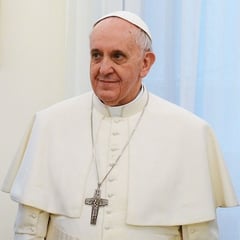 I received a forwarded email today of a picture of Pope Francis and Pope Emeritus Benedict 16. The picture was split and the Francis side depicted a seated pope in his simple white cassock and white skull cap (zucchetto) in an elegant yet simple cushioned chair of polished wood. The other half of the photo was Benedict seated in a “golden throne” on a red carpet, donning his red Prada shoes, red stole and cape (mozetta).

The pictures are intended to be drastic opposites and point out a litany of things that are missing from the Francis side of the photo ending with the red carpet.  The final caption reads,

“He is not interested in fame and applause ...Every day we like Pope Francis more!!!”  They may as well have added “more than Benedict”.

I love Pope Francis. I love his Latin style. Being Cuban myself, I connect to his natural, affectionate approach void of formality.  I appreciate that he does things his own way and that he can’t be bothered with some of the whistles and bells to which his office is entitled. Yes, he took a pass on the red Prada shoes.  He passed on the fancy chair, and he opted out of the living in the Papal residency.  Pope Francis is very “Franciscan” and that is his charm.

But does skipping the pomps of his office mean that those before him were wrong or vain or indulgent? Maybe it just me, but that’s the unspoken message I have been receiving loud and clear from media outlets, chain emails and even fellow Catholics.  If he is “a pope for the poor” does that mean Benedict was a pope for the rich? John Paul II sat over a red carpet, too, and nobody is insinuating that he is interested in fame and applause.

This attitude is symptomatic of a bigger heart issue. I have often heard people deeply scorn the Church’s opulent cathedrals and vestments as wasteful when the money could be better spent on the poor. In fact, Judas said this too.  It’s as if they believe that while poverty exists we should be ashamed at such displays.

Firstly, let me point out that the Church is the largest non-government provider of healthcare services in the entire world.  She has opened homeless shelters and hospitals, fed more hungry and cared for more sick than any other organization worldwide. Nobody can claim to care for the poor better than the Catholic Church has or does.

Secondly, people forget that God loves extravagance in worship of Him. Recall Mary of Bethany who poured oil at Christ’s feet. That oil was worth a year’s wages.  Jesus was not offended as he did not see it as a waste, rather, He was offended that Judas considered Jesus not worth the waste!

God has a history of expensive taste and rightfully so!  He instructed the building of the Ark of the Covenant in acacia wood and gold and spared no expense. Aaron and his priests were instructed to wear robes covered with precious gems to reflect God’s glory. The garment called an ephod was made of linen with gold, blue, purple and scarlet and held together at the shoulder by two onyx stones set in gold. The colors each had their own significance like gold for divinity and purple for royalty, etc. On the breastplate were fastened twelve precious stones in four rows of three. Each stone represented a tribe Israel: The sash was also of blue, purple, and scarlet linen intertwined with golden threads. When a priest was dressed in his garments and sash it meant he was prepared and ready to serve.

In the same tradition, Papal attire is worn during religious services and is rich with meaning.   The red shoes symbolize the blood of the martyrs.  The white (purity) cassock has thirty three buttons symbolizing the age of Jesus at his death. The staff is obviously a sign of shepherding and the mitre a symbol of authority to teach. The red shoulder length cape known as a mozzetta, is symbolic of his political authority as the leader of the Vatican City State. Finally, the chair itself, which is typically painted gold and not truly made of gold, symbolizes the office or “chair of peter”. The chair was a symbol of the teacher in ancient times. It’s just like the post of university professor is referred to as "the chair”.  If there is such a thing as a throne, it belongs to the King of kings, Jesus Christ. The pope sits on it because he is Christ's chief steward, set over the Church until His return. (Luke 12:42)

The splendor of the Church's aesthetic tradition is intended to arouse in its viewers a love of beauty and to draw the mind towards heaven. We are sensual creatures in that we use all our senses to worship. Our eyes see beauty of the stained glass and beautiful vestments and artwork, our noses smell the incense, we hear the music, etc. God knows this and invites us into the pleasure of it for His sake.

Let’s remember that the pope doesn't own the robe, the chair or any Church artifacts, for that matter.  They are owned by the entire Catholic Church (therefore by you and me too), and have been dedicated to God.  He doesn’t get to take them home at the end of the day!

So, let each man demonstrate his own unique style and gifts to the church as vicars.  And those who scoff and tongue-cluck would do well to remember not to offend God by suggesting He is not worth the waste.  Jesus reminded us that the poor will always be among us. As long as each man do his duty to the church and guides her in her primary work to feed the hungry and care for the orphan and widow and all the spiritual and corporal works of mercy, let us not begrudge the bride her proper vestments as she awaits her groom.